A few weeks back, GeekJabber published a retrospective of Wolfenstein 3D. This was one of the first first-person shooter games for the PC that proved 3D graphics were feasible on the PC platform. Doom represented the next major step forward, representing an improvement in terms of both graphics quality and features.

The game still lives on today. Ultimate Doom is available via Steam, and is the same base game and graphics with the additional of a new level. Given the significant improvements over Wolfenstein 3D, I think it’s time to give it a bit of a play to see how well it works on a modern system.

Wolfenstein and Doom share many visual features. They have a very similar user interface and menu navigation and both utilise the same first-person perspective. It’s not difficult to spot that these are developed by the same company.

They do have a slightly different storyline behind them however. In Wolfenstein 3D, the aim was to escape from a Nazi prison. In Doom, you’re playing a guy colloquially referred to as Doomguy, who has to fight his way through monsters from the pits of hell.

Unlike the original Wolfenstein game, you also have other pitfalls that you have to worry about, such as toxic waste which damages your health if you run through it, ceilings that can crush you, and locked doors requiring keycards. One other significant difference is that a map may have elevators to different sections of the map, giving levels a sense of height that simply wasn’t possible in Wolfenstein 3D.

These additional features make the game feel far more complete than Wolfenstein 3D. That’s not to say that Wolfenstein is a bad game by any means, more that it feels more limited. You can think of it from the perspective of “things you never knew you needed”. Wolfenstein, being a product of more limited hardware, had to adapt to work within the technical limitations. Now that the hardware had progressed, more capabilities were possible. When you realise what new features this allowed, it seems obvious that these were missing from Wolfenstein in a way that you might not have noticed before.

All of these add up to a much more challenging, and more fun, experience in Doom. It is a very significant leap forward in terms of gameplay, and does add that level of variety that we would otherwise take for granted in more modern games. It is a far more mature game.

Playing the game even now is an enjoyable experience. The game is a lot closer to a modern first-person shooter than Wolfenstein. One annoyance though was the mini-map. Somehow the game decided that moving my mouse left would display the mini-map rather than the game. This got very annoying very quickly. Luckily you can customise the controls and turn it off. 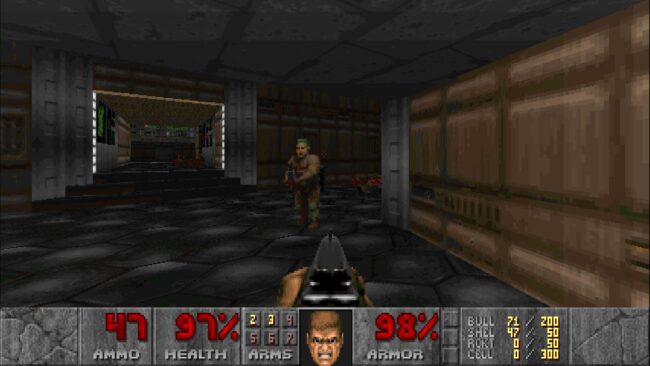 The graphics are a substantial improvement over Wolfenstein 3D. They’re not quite on a par of later games, but bear in mind this is an era where 486 and early Pentium-class machines were still king of the crop. There is a lot more detail and a lot more variety, making things a lot more interesting.

One thing that should be noted is that there’s a lot more blood and guts and yuk when you kill a monster. Most of us are used to seeing that in video games by now. If you’re looking for something more PG-friendly, Doom might not be for you.

This was another major milestone in terms of graphical quality in 3D first-person shooters on the PC. It would take another couple of years before the graphics were perfected, but Doom was another of those games that was a technical breakthrough that proved the PC was a capable gaming platform.

There are a number of games in the early life of the PC that served as major technical milestones. In the FPS genre, id software are known for providing many of them during the 1990’s. Doom is no different.

While the game graphically is obviously from an earlier era, it is still extremely playable and otherwise has a lot of the other basics done well. The graphical limits are down to the capabilities of computers in the 1990’s. It marks the point when the genre began to mature.

The game runs incredibly well on modern hardware, as you’d expect. Aside from a few annoyances, the game is still thoroughly enjoyable. If you’re into your retro-computing, this is definitely a game to include in your collection.