As mentioned in my recent CyberBorn review, I’ve been wanting to explore the first-person shooter genre a little more and add these to our collection of reviews. It’s one of the more common genres of game, and it’s a genre that has not heavily featured on GeekJabber.

Rift World caught my attention as it has more of a fantasy element to it. It seems not to be your cookie-cutter first-person shooter that seem to be the go-to for some gamers. I thought it worth trying to explore something a little different to see what

The gameplay deviates somewhat from the typical first-person shooter style. The game is set in a more fantasy style, where you are in a surreal parallel world. Rather than shoot using typical weapons, you seem to have these weapons built into your wrists. It’s almost like you’re a surrealist Spider Man.

It seems that I encountered a few issues though in actually playing the game, which meant I was not able to explore as much of this as I would have liked.

One of them is that the game’s menu suggests that there are a number of challenges you can complete. Entering this menu and you can do a whole lot of nothing. There is no real indication of how to activate any of these challenges, or even what any of them mean. It may be that they are actually achievements, however if that were the case, labelling them “challenges” is nothing but confusing.

The other major issue is going into the first level. It is clear that you have different rocks or islands that you need to jump across to get into the proper play area. If you fall off the sides, you essentially fall into the void and game resurrects you.

I don’t know whether it was because of a weird bug or whether they’ve spent a lot of time making this ridiculously difficult, but they might need to rename this “Resurrection Simulator”. I would frequently land on an one of the rocks that make up the course, let go of the keyboard, and keep on sliding off the edge. If it were not sliding forward, it would be sliding backwards. Or it would give you an instruction on how to dash or jump, you’d press F to acknowledge it, and then you’d slide off the edge and need to be resurrected.

I suspect it may be partly related to a habit I’ve built up where I try and sprint as much as I can in FPS to stay where the action is. Having said that, when I was deliberately forcing myself not to sprint, it only helped marginally.

No matter what the cause, it makes the beginning of the game almost unplayable. Twenty minutes in and I’ve lost count of the number of times I’ve been resurrected. Mostly it’s because I’ve landed somewhere and have just kept on sliding, which meant I was constantly falling off the edge before I can get into any serious gameplay.

The downside of this is that I could not get far enough unto the game to be able to sufficiently evaluate it. The fact that I was constantly sliding about the place and falling off the edge was just irritating. I don’t know whether this was done to make the game more difficult or whether the game is just downright broken, but the game is nothing more than an example of how to irritate your players. 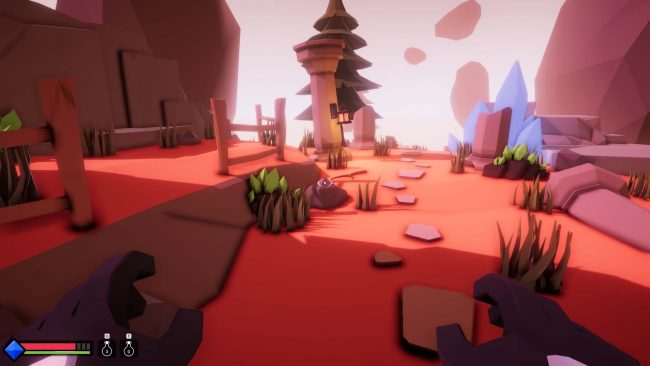 With this game, the graphics are deliberately very simple. Based off the system requirements, the game seems to be targeting the very lowest possible denominator and the graphics have been adjusted to match.

This is something they have got largely right. It is somewhat oversimplified, however in saying this they’ve been aiming for a surrealist atmosphere. I would say it does on occasion feel a bit too simplified and a little bit repetitive, but I have seen far worse. The graphics are somewhat effective, but if you’re looking for high-detail lifelike graphics, you might be disappointed,

This game seemed to have a lot of potential given the material presented in the game’s page on Steam. It does offer a slightly different look and feel to the cooker-cutter entries that often get released as first-person shooters.

It’s just a shame that certain issues made the game more irritating than fun, and meant that I could not get far enough into the game to properly evaluate it.