Robot Roller Derby Disco Dodgeball is a game that has been sitting in my collection for some time. It’s an older game, dating back to 2015. It piqued my interest because it combines the nostalgia of playing dodgeball when I was in primary school with the futuristic setting of robots.

I’ve now managed to convince one of our other writers, MrQGames, to get a copy and we’ve jumped in and tested out the online multiplayer modes.

The initial setup of multiplayer was initially a little confusing. Because both myself and MrQGames live in different countries, we’ve had to use online multiplayer, though there are options for local multiplayer.

Setting up the initial game settings was actually fairly easy. The confusion started when you actually launch the multiplayer game. Rather than waiting for other players to join when you finish setting it up, you ar then launched into the game itself. You are then immediately playing against a number of bot players. These bot players are replaced with human players as your friends join. This seems to be somewhat different to how other games handle this, hence why it can be very confusing at first until you work out how that aspect of multiplayer works.

Once we got around that, we were both able to start competing against each other. This is where things start becoming fun.

You are assigned to one of two teams, which you can select when you join. You’re then playing rounds of dodgeball against each other. You run around the course finding the balls, picking them up and then throwing them at your opponents, with the aim being to hit them. As the name of the game suggests, it is basically a similar concept to Dodgeball, which should be familiar to those that played the game while at school.

Depending on the round though, the objectives can be a little more involved than just hitting your opponents. Game modes include the first team to reach a particular score, and the first to a number of hits against their opponents. For score-based rounds, extra points are awarded for ‘trick’ shots. There are also other game modes including Hoops and Capture the Flag.

There are also a number of power-ups you can collect, which include things like having your ball return to you after you throw it and have cross-hairs to help you aim at your opponent.

It took us both a round or so to get used to the game. But once done so, it was certainly quite a lot of fun. This game would benefit from having larger teams: 1v1 works, but makes for some longer games on larger maps. Having four players in a game would work significantly better. We found having two players on some larger levels to drag on as you spend a lot of time chasing each other.

Given the fact that we both live in opposite sides of the earth, high ping times and the lag that this brings could have been an issue. Robot Roller Derby Disco Dodgeball still ran perfectly acceptably well given one of us had over 200ms of latency to the server we were playing on. 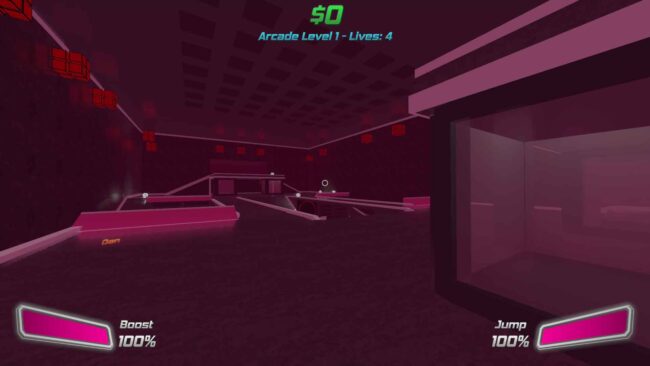 The requirements for this game are really quite low, so the game should run on just about anything. Fire up that old Potato PC you have, there’s a good chance it will work. The graphics are simple compared to other games, but still quite effective.

One thing of note is that this game has a graphical setting called “Photosensitive”. It would appear that this has been specifically set up for those that are for instance epileptic where the lighting effects could trigger a seizure. We would not want to guarantee the effectiveness of this setting, as we have no way of testing this, however it is still worth checking this option out if you think this will be an issue for you. I wish more games would take this into account, particularly fast-moving arcade-style games.

I wouldn’t call the graphics particularly detailed, but then with a game such as this, they don’t need to be. With the fast-paced nature of the action, your focus should always be on your opponents, not enjoying the scenery. It’s in a genre that can easily focus on simplifying the graphics to focus on the gameplay, which will have the benefit of being able to run on a wider range of hardware, rather than allowing themselves to be caught up in the finer details of every surface. If you’re looking for intense graphical detail and beautiful scenery, this might not be the game for you.

The game is definitely fun to play. If you’re into multiplayer arcade style games that will run on a potato, this game is very much worth investigating

The game would be really great if you have larger groups to play with, as some of the maps require 4 players to work well. Being a low-cost game, with four-packs available via Steam providing even more value, it’s definitely a good way to pass an hour or two as a party-style game without breaking the bank.