I’ve mentioned elsewhere, for instance in my Lemmings review, that I have fond memories of my first IBM PC Compatible at home in 1992.  This is by far not the first computer I ever used.  That machine would be the BBC Micro Model B, which was a very common machine in schools if you grew up in the United Kingdom, Australia or New Zealand in the 1980s.

Every platform of it’s day would have a series of games that defines it.  On the BBC, one of those games would be the Repton series of games.  The entire premise of these games is that you must guide Repton through the maze, collecting all the diamonds and push boulders about without them falling on you.

Rocka Feller promises to bring the same concept to the PC.  So in another trip down memory lane, I review another game that promises to help me live the nostalgia of my cbhildhood.

When you initially launch the game, the first thing you will want to do is go into the configuration options and set the resolution.  On my machine, it defaulted to 800 by 600.  The highest you can go is 1366×768.

This is one thing that struck me as a little unusual about this game.  There appears to be no options to go full-screen, the game must be run in a window.  There is also no option to select resolutions of 1080p or 4K.  I am not clear why this is the case.  The game specs wouldn’t be taxing for any current-generation machine, and gaming at resolutions of at least 1080p has been standard for years.  I can’t think of any reason why a game of this type and released in 1998 would limit itself in such a fashion.  I would also imagine that if you had the luxury of running a 4K monitor, the game window would be far too small to be enjoyable.  At the very least, your standard desktop and other applications you have running serve as a distraction while playing.

The only reason I can think of is that there appears to be no “exit” option within the game itself.  To stop the game, you simply close the window, and close the text window that sometimes sits behind the game window.  This doesn’t appear to be a particularly user-friendly approach to exiting.  Surely they’d have some sort of mechanism to allow you to exit the game via conventional methods, and doing so would allow them to run the game full-screen in more sensible resolutions.

The graphics on the original Repton game were very simple.  Given the computer power available on the BBC Micro machines, while in some ways very impressive, you were never going to get complex scenery. 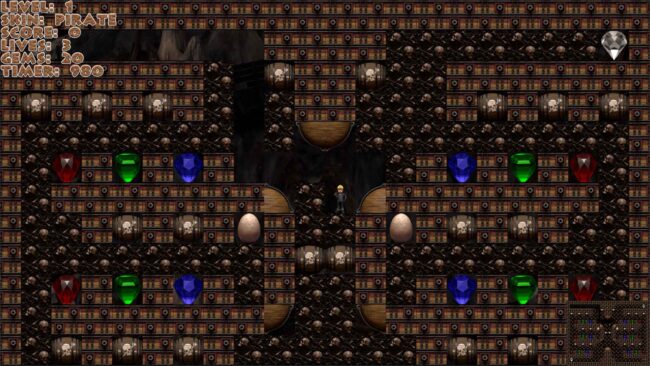 As you can see from this, the simple nature of the graphics has been preserved, but modernised.  I do like the fact that the authors of the Rocka Feller game have basically kept the character of the earlier Repton games.  It’s very obvious they’ve previously been BBC Micro users, and have been inspired very heavily from the Repton games.  It’s a very tasteful modernisation of the graphics that were available at the BBC Micro.

My only criticism would be my earlier comments about not letting you run full-screen at 1080p or 4K.

The soundtrack also demonstrates that the earlier Repton games heavily influenced the Rocka Feller game.  One of the tunes they use in Rocka Feller is a version of George Botsford’s “The Black And White Rag”, which is the identical track used in the original Repton games.

One thing I’m glad about is they’ve included additional music in the Rocka Feller game.  While I do like the Black and White Rag, I’m sure plenty of primary school teachers would have been driven to despair by having the same piece of audio playing over and over and over again as some sort of recurring chiptune nightmare.  At least with Rocka Feller, there is somewhat more variety to the soundtrack.

The game play is also virtually identical to the original Repton game, though I can’t say with certainty that the levels are exactly the same.

The basic concept still remains: Try and collect all the diamonds, without having the boulders fall on you or move them into places where you get stuck.  Don’t crack those eggs though, else the monsters will eat you!

This is very much a recreation of the original Repton games.  Think of it as navigating through a maze with obstacles designed to trip you up.  It might take a few goes to finish a level, so you’ll need to make sure you have a good memory to remember how you solved a problem each time you make a mistake and get stuck.

Some people might not understand the appeal I found in this game.  It is essentially a clone of the Repton games found on the BBC Micro’s common in the 1980s.  It is a very tasteful clone though, and brings the same concept into the modern age.

If you remember when the BBC Micro’s were still in use and remember the Repton games, this would be a modern remake I’d definitely recommend.  I might not spend hours on this game, but for me it was worth it for the experience of a nostalgia trip on modern hardware.  For this reason I’ve given it a score of 8 out of 10.

Other people who haven’t known those earlier machines might not have that same feeling of nostalgia, but if you’re into tastefully done maze games that test your memory, this would definitely be a cheap game that would give you that experience.

The only thing missing is the ability to run full-screen.