When I first began seriously getting involved in the Twitch community, some of the streamers I gravitated towards involved themselves in survival games. In particular, DayZ was extremely popular.

I thought it high time to get a bit more exposure to some open-world survival type games. Savage Lands came onto my radar that seemed to fit the bill. It should be noted from the outset that this seems to be a fairly old game, having first made its debut in 2015. The reason it came onto my radar is it seems to have only been recently released on Steam, as it can come up in my queue of new games to check out. Given the low cost, I thought it worthy to check out Savage Lands.

The game is set on the frozen shores of Tarvhas. The goal is to use whatever you find in your surroundings to survive both the freezing cold as well as whatever hostile wildlife you find surrounding you. This typically involves hunting for food, building campfires, and protecting yourself from all of the various nasties out to eat you.

As you explore the map, you also uncover the backstory behind what happened on the island and why you are there.

The game itself is fairly well laid out, and the interface was fairly intuitive. As someone who has never really played this genre of the game, it was fairly quick to pick up. It seems easy enough to get the hang of.

One thing I did notice was that it’s not really a game you’ll want to play as a solo mission. It really needs to have a team of you together so that you can work as a team and have that interaction. At present, it seems there’s only a small number of network games active. This might be unsurprising given the age of the game, however if you have a group of friends that can play, there’s nothing stopping you from going down this path. It really does feel like it works better as a multiplayer experience with friends. If you can’t get a few friends together, I can see this getting boring very quickly.

It almost seems a shame though that there seems to be a small number of network games. The game has only recently come to Steam, so obviously the developers feel it has a bit more life, and it does feel like a fairly solid experience even if it is a few years old now. I would love to see a bit more interest shown in the game as I think it still has potential. The cynic in me thinks there is the potential for this to be one last money grab, though if this were the case, I’m not sure why they would go to the effort to bring a nearly seven year old game to Steam just for the money. 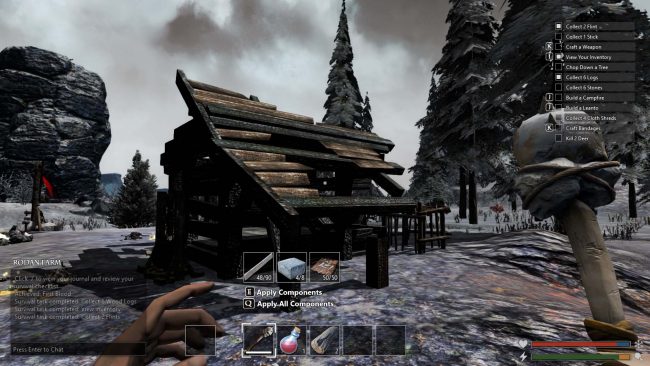 Given the age of Savage Lands, the graphics quality is actually fairly impressive. It has a certain apocalyptic feel to it, which I think is the point of the game. It fits nicely into the storyline.

The game itself actually still looks pretty amazing, given this is essentially a re-release of a seven year old game. The graphics still hold up reasonably well to modern standards. I’m unclear if there has been much of a graphical update as part of this release, however the Steam page still indicates some level of active development, so this could very well be the case. Either way, the graphics were extremely well done.

There is a certain cynic in me that thinks this might be one last effort to make the game relevant again by bringing it to the Steam platform. There seems to be a few in the game’s review section that might share the same cynicism. I’m not sure how much weight I can really give this viewpoint, as it would really be a lot of wasted effort to bring such an old game to Steam just for one final cash grab.

The game itself seems relatively decent, it just lacks the long list of multiplayer games. If you have a number of people you can bring to the game, this could definitely work. I would like to see some more interest in the game because it did seem fairly decent, even given its age.

I just hope the cynicism doesn’t end up being justified and the game does have a bit more life in it after eing brought over to the Steam paltform.