Setting up Proton to Game on Linux

Gaming on the Linux platform has become increasingly realistic over the last few years. It’s still far from perfect, and it is still probably a few years before you can permanently ditch your Windows installation if that’s what you’re planning to do. However, the Proton system, which is very heavily built into Valve’s steam client, means that a surprising number of the Windows games in your Steam library work reasonably well under Linux.

As we covered in GeekJabber Live! Episode 11, there are a few things you need to be aware of before you get started. So from my own testing, I’ll covered a few of the things I’ve found.

Are there any limitations?

Firstly, the default settings for Proton within Steam are really quite conservative. With these default settings enabled, only a very small number of games in our could actually be installed natively on Linux. This is because Steam by default only allows you to install games that have actually been tested and verified by Valve to actually work. While the library of games in this category is growing, this is only a drop in the ocean compared to the number of games on the market.

There are options which we’ll get to in a moment that expands the number of games you can install, but as yet it can still be a bit hit-and-miss. When we tested it, it worked for a surprising number of games, but others were still broken, if they launched at all. This means that, unless you’re really lucky, it could be a while before you’re able to ditch your Windows installation entirely.

Another feature of the Steam Play system, which might be of help to Linux users, is the ability to stream games from a Windows machine. Any games installed on a Windows computer on your network can be streamed to your Linux machine using tools from within the Steam client. We’ve found that this doesn’t work particularly reliably, and sometimes troubleshooting information involves as much guessing as it does practical solutions. This means if it doesn’t work for you, it may end up being a process of frustration as you try and work out a solution.

Having said that, a surprising number of games did indeed work. This means that gaming on Linux is definitely doable, it’s just got a few more iterations to go before most of us can safely ditch our Windows installations.

What settings to I need to set?

If you’re looking to set the advanced options to allow more games to be played under Linux, the special sauce can be found in Steam’s settings. You’ll need to go to Steam -> Settings -> Steam Play. 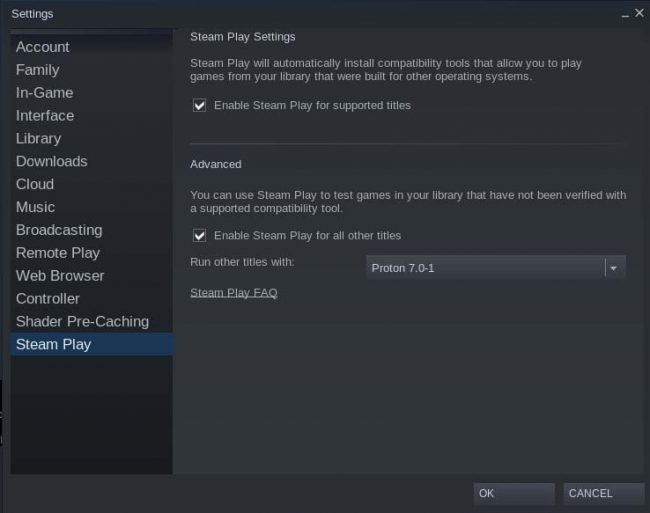 In here, tick the option to “Enable Steam Play for all other titles”. You’ll also need to select the version of Proton you’ll want to use with these games. Unless you want to live on the real bleeding edge, you’ll want to select the most recent version that is not experimental. Of course, you can select an experimental release, but you’ll be gaming by the seat of your pants if you do so.

So how well does this all work?

This solution is far from perfect. Your mileage may vary. As part of the Live Show episode, we’d tested 10 random games, and around 5 of them worked without hiccups. The other 5 either failed to launch, or launched but were somehow glitchy.

We expect the situation to improve over time, as it has been doing since Proton was first released. But at this point, we’d recommend still having a Windows installation kicking around just in case. The situation is far from awful, but this does show that work still needs to be done before Linux can completely replace Windows as a gaming platform.

The situation with gaming on Linux has certainly come along way.

Our experiments have shown that, unless you’re really lucky, you might want to still keep a Windows installation kicking around because it’s not quite smooth sailing yet. Having said that, a surprising number of games actually worked without too much effort

At this point, it could be quite feasible to have Linux working for most of your games. For a few, you may still need to dual boot back to Windows. The situation on this is improving, but I dare say with the sheer volume of games, it’s probably a few years before we can safely encourage ditching that Windows install.