SnowBrawl came onto my radar not only as a free game, but also as a simple yet silly game to have a bit of multiplayer fun with amongst friends. This could be another game to bring into rotation when I am able to get a few friends together for gaming sessions.

Another appealing part of the game was that it was a game made by a team of students. I’m all for supporting people learn new skills. With all this in mind, let’s see if this game is any good.

The gameplay is really quite simple. It’s a multiplayer-only game which allows you to have two teams of up to two players each, you choose a map, and then run around and throw snowballs at each other.

There are a few other game modes as well, including Capture the Flag and Touchdown. These game modes were not tested when we tried, but we’ll get to why in a moment.

I do worry I have oversimplified the game here, but in a sense that’s also quite deliberate. There is not a lot to this game at all. It’s clearly intended to be a simple and fun game to pass the time without having to get yourself caught up in complication. In this sense, they’ve got that part more or less correct. There are, however, a few little annoyances that take away from this.

The first is that the interface for the lobby is a little confusing. I was testing the game with one of our other contributors, Qwerty, and couldn’t understand why I joined as a spectator. The reason was that the lobby gave me the impression that you just named the game, joined a team, then started it. If you do this, you will be joining as a spectator.

If you want to join the game as an actual player, you’re supposed to click on the big green tick and choose an avatar before joining. The process is not necessarily difficult, it’s just it’s not labelled particularly well. It’s not obvious what the tick does, or that you’re supposed to click on it. A little bit of refinement of the user interface to make this clearer would go a long way.

The other issue came to a rather weird bug. The first game we played was a round of Freezematch, where you throw snowballs at each other and score points by causing the other player to freeze. In this mode, Qwerty absolutely slaughtered me. Playing a second round with the exact same settings and none of the snowballs did anything. We deliberately stood in front of each other and threw snowballs at each other’s heads and nothing happened. It was almost like the hits were not being registered. It was for this reason that we didn’t delve into the other game modes, as we were left with the impression that this was still an early beta version of the game.

To be fair, the game was listed as being ‘very much unfinished’ on their Steam page. I would definitely agree with this – it appears to be downright buggy in certain circumstances. This would be somewhat excusable if the game were listed as Early Access, after all using your community to help you test is one of the reasons Early Access exists. As it is, this is hidden away in the description where it is easily missed.

The other thing of note is that the game really doesn’t play well with only two players. You really do need at least four, as the maps are reasonably big. With two players, it is more a game of Hide and Seek.

The bugs at this stage seem to take too much away from the experience to really get any enjoyment out of the game. This is a shame, because the game itself would actually be a decent freebie otherwise. If it weren’t for the buggy nature of the game, it would otherwise have potential. 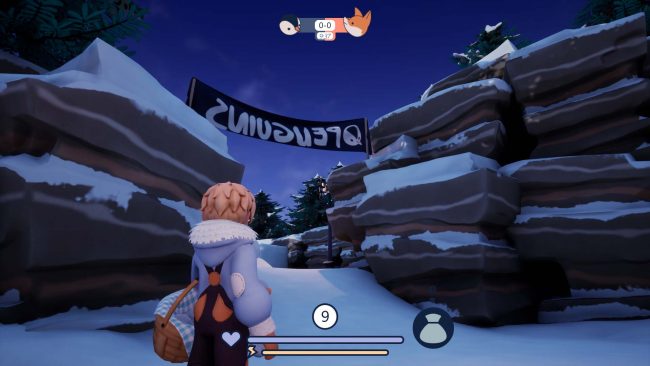 This is one area where the game has done fairly well. For a simple game that’s supposed to be just a bit of silly fun, the graphics are surprisingly good.

This is particularly impressive given that the system requirements simply list a GPU with only 1 gigabyte of VRAM as the minimum requirements, which means it should cover you for some extremely old graphics cards.

I’ve paid for games where the graphics were significantly worse than what we get in SnowBrawl. The graphics here are not the best I’ve seen by a long shot, but are still very impressive for a game that’s basically being given away.

I wanted to be more positive about the game. The graphics are definitely up there, and the gameplay had the potential to be a fun little casual gamer.

As it is, this is a game that really should have been labelled as Early Access The bugs we came across just took away from the enjoyment a little too much. If they were to fix the bugs, the game would be a actually quite good. The one thing I hope they learn is what the Early Access program is, as the game feels more like a Beta version that requires work rather than the full game and so should really be part of this program to help manage people’s expectations.