I once had aspirations of becoming a Rocket League player of sorts. That didn’t turn out very well for me. I spent more time circling around the ball than actually hitting it. Turns out, Rocket League was not the game for me.

Soccer But Different came onto my radar when searching through new games on Steam to try and find something to add to my review collection. It is definitely very different from Rocket League, though it does seem to fall into that same “oddball version of Soccer” category. It’s also a free to play came. But how different will it be?

The gameplay is fairly simple. When you launch the game, you have the option to either do a Quick Play where you play with yourself so to speak, or you can create or join a multiplayer lobby.

The Quick Play option allows you to get a little bit of practice in. Going into this mode, you see the game is essentially soccer. You have a top-down view, and are playing a critter. The basic aim is to get as many goals as you can. In this mode, you are the only player so that’s not particularly difficult, though it is a good way to get a handle on the controls without the stress of multiplayer.

One criticism is it appears the camera is fixed. This might be annoying for some. I would have liked to have placed the camera slightly behind me rather than directly overhead.

You also have a number of power-ups that you can use to make the game more interesting. Depending on what you have, you can for instance turn the ball into a wrecking ball and change the physics of the game, or swap everyone’s position on the field. These do add quite a lot of fun to the game.

The fun starts when you play multi-player. It should be noted that there aren’t very many games going on at any given time – indeed when I was testing, there were none. To get the most out of this game, you will need to coordinate with some friends to be able to play.

I’ve managed to play a few multiplayer rounds with Qwerty, one of the frequent contributors to our live show. One thing of note is that the lobby system is very simple. When you create your lobby, you do not wait for others to join. You go straight into the game. This means the person starting the lobby has a slight advantage for the first game.

The other thing to note is you don’t get to choose which team you are on. As each player joins, it alternates between the two different teams. Again, I would really like this to be corrected.

The game is otherwise a lot of fun. The competitive nature of the game comes out very quickly. It becomes particularly fun when you start playing some of the additional cards you have at the bottom of the screen, which as described above change how the game behaves.

The game is also very easy to get the hang of. The controls are super-easy and straightforward, which means you pick it up very quickly. The interface is very well implemented, and there is no quirkiness in the controls that you have to fight. We found both of us picked the game up very quickly.

These all combine to make a really fun experience. We both enjoyed doing around half a dozen rounds of the game and it is definitely a game that I can see put into rotation. Aside from the concerns about the lobby, the game is very easy to get your head around and is a lot of fun. 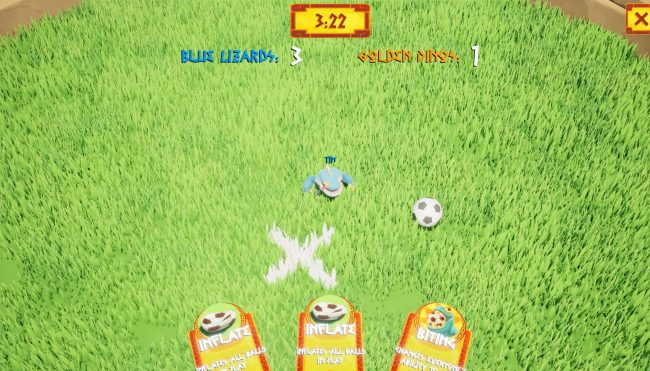 I must say I am particularly impressed by the graphics in Soccer But Different. It doesn’t have all the glitz and glamour of something like Rocket League, but it doesn’t need to. It’s simple, colourful and effective. The graphics are good enough to be quite impressive without going overboard on distracting and excessive visual bling.

Given they seem to be targeting a very modest setup, it’s good to see that those with less powerful machines still have options that look good.

The game itself is surprisingly good for what is essentially a free game. The graphics are excellent, and the gameplay is quite a lot of fun. The only big complaint is there needs to be a much better lobby system as what they have now is a little too primitive, though some may also not like the fixed camera.

I do hope this game can get some more attention, as if a community can be built up around it, this could be quite a decent game.