Stray is a game that came onto my radar a while back. A trailer for the game made its way into a Discord group chat that I’m a part of and ever since I’ve been looking forward to properly reviewing it. There’s something about playing a game as a cat that somehow appeals to me.

Now that the game is released and I’ve had time to give it a bit of a look, I thought it very much worthy of throwing something up as a review.

The premise of the game is actually really simple. The game is basically a guided survival and exploration game where you play as a stray cat.

You start with your clan of cats, and you explore the world as a team. At one point, you find yourself separated from your group in a horrible turn of events and end up in what appears to be an abandoned city. Your job is to then explore the city, solve a series of puzzles, and return to your clan.

For a game with such a simple premise, it is strangely addictive. Unlike other puzzle-solving games I’ve come across, the puzzles are not particularly cryptic. The game essentially provides a lot of sometimes very obvious clues to help you get through. While some people might think this is cheating, it seems to be a decent balance between having things glaringly obvious and not maddeningly cryptic. It allows you to focus on the exploration, not give up in frustration over a puzzle you cannot solve.

This is what makes the game in a sense. It encourages you to explore and appreciate the world that has been created for you, rather than getting too caught up in working out the puzzle you’re trying to solve. I’d go as far as saying that’s almost entirely the point of the game, to appreciate the environment around you as much as the challenges themselves. They’ve got this almost perfect. 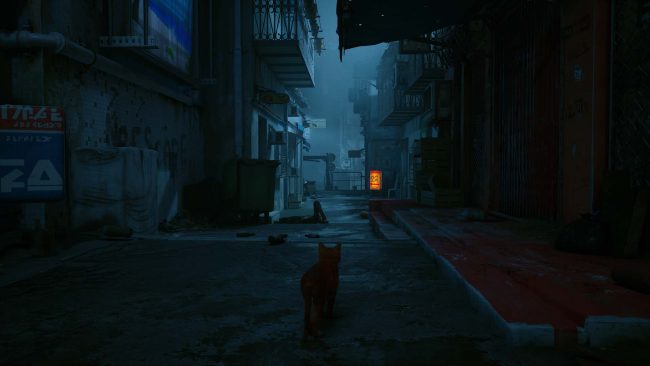 The graphics are nothing short of absolutely incredible. To put it simply, this is how graphics should be done for a game like this. I’m not exaggerating when I say the graphics are absolutely stunning graphics I’ve seen in a game.

The fact that they’re targeting some older GPUs makes this even more impressive. The 1660ti that I tested this on is well above even the recommended card, yet is still a couple of years old. I am still seeing butter-smooth and stunningly beautiful graphics that I would have thought would have required a far more powerful card.

The developers have obviously spent a lot of time optimising the graphics for Stray, and it has paid off. If you ever needed an example of how to do graphics, this is it.

Some people might trivialise the game for being too easy for holding your hand through a little too much of the game. But that would miss the point.

This game has been designed to look stunning, and to encourage you to appreciate the process of exploration and to enjoy just looking around and exploring. Getting too caught up in cryptic challenges would take away far too much from that experience.

On that point they’ve got it absolutely perfect. They’ve also got some of the most impressive graphics I have ever seen in a game which, given the more modest system requirements, is an achievement worth acknowledging.