It seems Fall Guys has set a standard in physics-based obstacle courses. It is certainly a game I’ve seen crop up when watching some of my more regular Twitch streamers. While Fall Gus seems to be the popular title that all the cool kids play, that doesn’t necessarily mean that other games in this genre aren’t worthy of attention.

Stumble Guys is one of these competitors. While it is currently priced at $A11.50 on Steam, the developers have announced from April 1 2022 the game will be free. I would rate this as worthy of attention as a possible alternative to what Fall Guys have done.

The game is relatively straightforward. Stumble Guys can be summed up briefly as a physics-based obstacle course. By this I mean you essentially have to run through an obstacle course where there are plenty of obstacles designed to turn you around, knock you down, or generally just get in your way.

The reason I referred Fall Guys earlier is that, as the Stumble Guys name suggests, this is a very similar concept.

Launching the game, you are able to customise your character. I would definitely recommend doing so. Every game starts with a large playing field of 32 players, and you will want to be able to identify your character. It’s very easy to get lost in the crowd as many people don’t customise their characters.

When you launch into a game, you are basically connected to an online game where you start with a field of 32 different players. The game then selects a track, and you will then need to try and navigate yourself through the obstacle course towards the finish line. If you are one of the first 16 plays to make it to the end, you qualify.

If you’re one of the lucky through, you then have to run through two more rounds to cut down the field even further. The first person to complete the third round is declared the overall winner.

One thing to make note of is by default when you click Play it connects you to a random game with random other players. It is possible to have a game just with your friends. This is done via clicking on the “Party” link on the home screen. You can create a room, and then provide yourself a room code which you can provide to your friends to join via that same party link. I mention this because it might not be apparent to some, which means they may miss an important game feature.

Playing the game and it is quite a lot of fun. It is definitely challenging, but in a fun way. I have done a few rounds of it, and in only a small handful I’ve been able to qualify past the first round. I have found that some tracks are easier than others. This is to be expected, after all they can’t make the game too easy!

I’m not sure this is a game that I’d invest hours into, but it’s definitely a fun way to kick back and sink half an hour or so into if you’re looking for something to do. The good thing is that the games are typically fairly quick, which makes it easier to invest as little or as much time as you want. They’re typically not games that need to run for a long period of time.

The game appears to be fairly active as well. . The game is a few months old now, however it was very easy for me to connect to a game. I was doing this late on a Friday night Australian time. I would expect that to be a quiet time as this is when America is only starting to wake up and Europe would be at work. However, I don’t think I spent more than about 15-20 seconds connecting to game. With the game soon to be free, this could well mean there’s more interest in the game, so I don’t think you’ll have difficulties finding players for a while. My only concern would be whether making it free to play allows for the developers to maintain enough revenue to continue running the infrastructure. 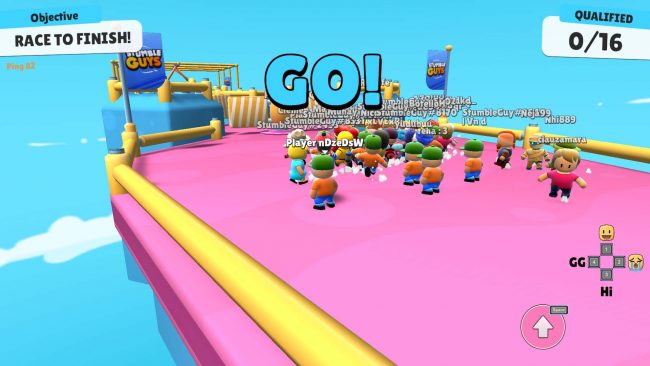 The graphics are actually quite impressive. The specs for the game are relatively modest, yet they’ve been able to get the graphics to a fairly decent level.

The graphics are quite colourful and bright. They’ve obviously been simplified to try and maximise the range of equipment it can run on, but it’s been done incredibly well. I’m actually quite impressed with what they have done to make this work well.

I’m actually honestly very happy by what they’ve done with Stumble Guys. While I haven’t played Fall Guys, I’ve seen it streamed often enough to know what it’s like. Stumble Guys is easily as good and is a very worthy competitor.

Having it soon to become free, I think this will definitely cause some more interest to come to the game. Given it’s only a fairly recent game still, being released in October 2021, I’m not entirely sure how it will be funded once it goes free-to-play. As long as there is sufficient revenue to pay for the infrastructure, I think this could be hanging around for a while and remain very popular.