Back in the 90s, I had the luxury of playing the original SimCity game as well as SimCity 2000. This was a particularly popular franchise back then, and it was extremely easy to sink hours into the game building large cities and keeping them running.

There have been a few modern city building games which are obviously attempts to do a modern version of a SimCity like game. While I won’t lay claim to having played each and every one of them, I have yet to see one that really captures the essence of what the original SimCity was. Until now.

Tap tap builder seems to be a city building game that intends to capture the essence of that old SimCity franchise with its own take.

You might be wondering why the lengthy introduction mentioning SimCity. This is quite deliberate. Tap Tap Builder is a very similar style of game. You start with a small island of land, and you need to build a city on top of that.

There is one very big difference between SimCity and Tap Tap Builder. Where SimCity is more of an open-ended experience, in Tap Tap Builder you’re provided a set of “tasks”. This will be for instance build three blocks of road, then build a house, and so on. This will help guide you through getting your city started and further managing it. When you complete a task you are rewarded with extra cash and resources.

These tasks are actually surprisingly handy. While there is something to be said for the open-ended nature of the original SimCity, I think having a guide helping you through is a great way to help get your game started for the first time. It’s essentially a type of basic tutorial to help you get started. It also helps introduce the concept of managing your resources, which is something you will need to play close attention to, in much the same way you would have done with SimCity.

The one slight annoying thing is the one thing that gives the game its name. When you place a building, you essentially have to tap it a number of times to complete the building process. This is OK for a tablet situation where you’re using a touch screen, however it is a little annoying with keyboard and mouse. It just seems to be endless clicking for no reason.

The game is otherwise done very well. It does capture the original SimCity concept very well, while successfully adding their own twist to it. As a lower-cost game, it’s also fairly affordable for those who don’t necessarily have huge budgets to spend on games. 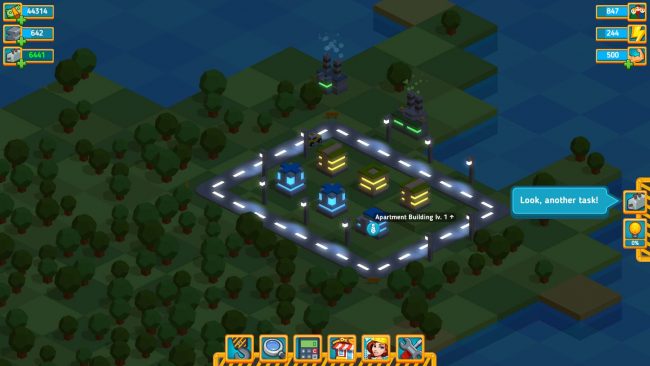 The graphics in Tap Tap Builder are pretty decent. Targeting a NVIDIA 1030, which is an entry-level GPU, compromises have had to be made to keep the graphics relatively simple.

In saying that, this is an example where it’s been done particularly well. It’s cartoony, but in a good way. It’s very impressively done for something that targets such a low-end setup.

I would say for the simplifications they’ve done, a lot of attention has been paid to doing this in a visually appealing way.

There has been a rise in retro gaming in the last couple of years, and I get the impression that this might be targeting people who remembered SimCity and want to have a similar game for their kids. There is a reason that I have made the link between the two, and this is a large part of it.

The only criticism of this game is the endless clicking you have to do to progress your building. It is otherwise done extremely well. It is far more guided than the original game, which will help get people started. This has been done particularly well.

If you’re looking for something that closely matches the original SimCity, this would be a perfectly acceptable way of going about it.