This came to my attention when going through one of the discovery queues in my Steam account. It was appealing because kit was pitched as a short adventure game, free, and one that may be a bit more family friendly.

I thought I’d give it a try to see if was any good.

The gameplay is fairly straightforward. The Lost Dachshund is a point and click adventure game. Your dog, which was a present for your grand-daughter, has gone missing and you need to click around the island to find it. While you’re on your journey to find the dog, you must solve a number of puzzles.

The game in particularly aimed at children. The story telling in this game has obviously been extremely simplified to help younger viewers get their heads around. This is done particularly well. It’s simple to follow and understand, which makes it easier for a younger audience to follow what’s going on.

The interface itself didn’t take long to get a grip on. As you move your mouse around the screen, it becomes obvious which items you can interact with, and which parts of the screen will help you navigate to the next part of the map, though there are exceptions.

It’s notable that the game is fairly short. The game could be played in a few manures if you know how to solve the puzzles. It seems to be just long enough to be satisfying, but not so long that you lose attention.

I did hit a few stumbling blocks though. With some of the puzzles, it sometimes isn’t immediately apparent what you’re supposed to do. For example, at the Birdwatching hole, you are supposed to open a tackle box to gain access to a few items that you’ll need to fix the bridge. The shapes on top of the box help guide you towards unlocking the box, though it’s not immediately apparent how. This may be fine for adults with developed problem-solving ability, but as this is a game more targeting kids, this may become more of an issue as they will reach this space and not be able to figure out how to proceed with the game.

Further, while most of the time it is apparent what you should click on to continue the game, sometimes it’s fairly well hidden. At the same location, it took me a moment to work out what to click on to continue. This may cause some players a bit of frustration.

This indicates that there’s probably a bit of room for improvement. While the game is otherwise great, the problem solving may end up being a little too complicated in places for younger audiences to follow along and this may cause some players to give up in frustration. This would be disappointing because the rest of the game is actually reasonably well done. 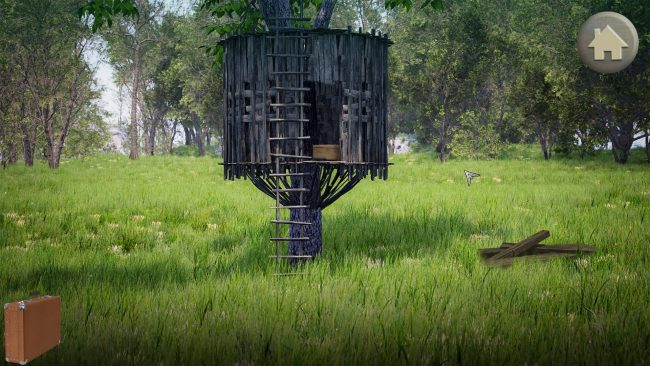 The graphics in the game are really quite good for what is essentially a free kids game.

Of course, this is helped by the fact that it’s a point-and-click style adventure. It’s essentially a series of static images, which helps with the design, but the graphics do have a very good aesthetic to them.

In this instance it works. It means you don’t get caught up in unnecessary visual bling and you don’t get distracted from the story line. While it won’t work for every game, it works well here given the target audience.

The intent of the game is actually quite good. The story telling and interface are to be applauded. They’ve got these parts of the game spot on.

The things that catch it out are that the occasional oddities in the user interface, as well as a few challenges in the problem-solving aspects that may be a bit confusing four younger players.

A little bit of refinement here I think will make the game a bit easier to follow, and perhaps a little less frustrating for younger players.