I’m writing up this review a little bit later than I was hoping. Unfortunately, it’s a case of life getting in the way. I’ve finally managed to get something written.

I have been excited to test the new version of The Stanley Parable. I do have the original version in my Steam library and had a lot of fun exploring many of the different endings when it was released, though I’m not entirely sure yet whether I ever managed to find all of them. This version marks the addition of new content, as well as remaking it so that it can be ported to a plethora of consoles rather than be simply a PC-only game. Let’s see how it fares and whether it is worth having a look at if you already have the original game.

In a way, it’s very difficult to accurately describe what The Stanley Parable actually is. This is partly because you really need to play the game yourself to truly understand it and to get the full experience. But I will try and sum it up as best I can.

The game is partly a combination of storytelling and part walking simulator. As you walk through the game, the narrator tells you what you need to do. If you follow what the narrator wants you to do, the game is over fairly quickly. The fun happens when you don’t follow the narrator and start making your own choices, and then you realise that the game is also a rather fun commentary on the state of computer gaming and free will in general.

I don’t want to give too much away here because it’s one of those games where “you had to be there” to get the full experience, and you really want to explore all the different endings yourself rather than get it all through spoilers. I will add a few things of note though.

When I first played the expanded version, I went about exploring some of the endings that I remembered from the original game, as well as try and explore what was new. I was at the time streaming it to my Twitch channel so a few friends could join in for the ride. One of the people watching made several references to both the writing and the voice acting being phenomenally good, and I tend to agree for both versions of the game. Kevan Brighting, who does the voice acting for the narrator, does a brilliant job of expressing the emotions of the narrator as you start to deviate further and further from the storyline. He has also portrayed the absolutely excellent writing behind the storyline exceptionally well.

I should now make a reference to the additional new content that’s in the version. I am still not convinced I have found every possible ending in either version. However, one of the first things I tried to do was explore some of the original endings that I remembered. This is absolutely worth doing if you’ve played the game before. Some of the original endings have remained as they were, however some of them have been redone. The redone endings are just as good as the original.

Once you’ve gone through one or two iterations of that, you will find there’s a number of new endings that suddenly open up. These are just as hilariously well done as the originals. I doubt I’ve discovered all the new endings yet, but the writing and voice acting on the ones I did find were up to their usual standard.

So to sum up, I suppose people are possibly wondering whether the game is worth purchasing again if they already have the original game. Given the quality of the new material that I’ve found already, I would say absolutely. This is even more so if you want to have a version to run on a console, as it appears this version is available for most of them.

If you’ve never played the game before and are looking for a good laugh, the Ultra Deluxe version is definitely the one to go for just for the additional content. While I don’t have a huge audience on Twitch (or even here for that matter), those that did turn up and engaged with chat thoroughly enjoyed the top-quality writing and voice narration.

I will make mention of one graphical glitch that I’m aware of. This is from a friend who also played the game. While I run on a more traditional gaming setup with a Windows machine with a pair of 16:9 monitors, he ran the game on Linux on a monitor with a 32:9 aspect ratio. The image above is from his setup and you can see the menu is slightly …. broken. It did come with a comment that other games based on the Unity engine also have similar glitches, so I don’t think this is necessarily a Stanley Parable issue, more an issue with Unity not always playing nicely for those running Linux. 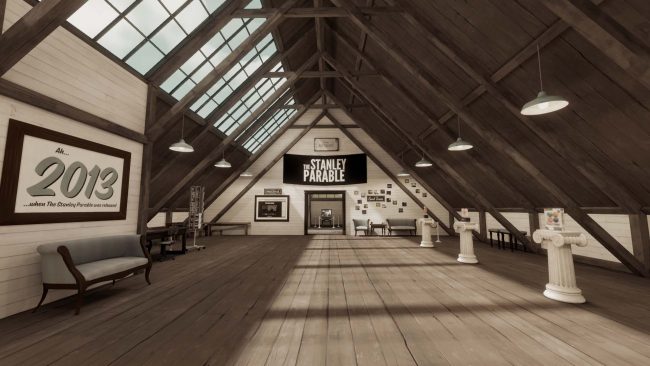 This is what I was seeing as part of the new content. The graphics are definitely still fairly decent. Coming over to the new Unity engine and the lighting did appear a bit different, which was a bit jarring for some people. I can’t really say I hated it at all, though I did notice the difference. I suspect this may be a personal preference thing.

The Stanley Parable has always been a great game for me. The original game had phenomenal voice acting, great writing, and was a hilarious way to make a point,

This has carried over to the new version, and the additional content is equally well done. For those that want to enjoy the original game again, I think there’s enough new content to justify the price of admission. It’s also now available for console as well as PC, which will allow the developers to introduce this phenomenal game to a new audience.