Open world style games are a style of game I’ve been meaning to look at a bit more deeply. I’m not necessarily referring to just open-world survival, as the genre covers a multitude of sins. What appeals to me is the open-ended nature of some of these titles allows for more open-ended exploration which allows you to interpret the game in different ways.

The Thief came onto my radar as it was a certain twist on the storyline. You’re basically playing the bad guy. I thought I’d spin it up and give it a try.

The game itself is relatively basic. You are playing the character of a thief who enters a village at night. The goal is to kill all the inhabitants, and loot the houses of anything of value and escape with it.

It’s relatively simple stuff. One thing I will note is that the AI in the enemy characters can be a little bit stupid at times. Granted, I was playing on the easiest difficulty so that I could get a handle on the game for review. There were times when the villager characters would see me and just not do anything at all. They were also one-shot kills. Other times they would just stand there and not do much of anything at all. The easiest difficulty level seems to be just a little too easy.

Another interesting quirk is the behaviour of some of the villager characters when they are killed. You would expect them to just fall to the ground, as is fairly normal. Some of them at times would scrunch themselves up in a ball and then fly away in the wind. It just seemed a little unusual to see the character you just killed float away.

Finally, once I’d completed the first map, I expected to be taken to a new map to try again. This is not the case. The initial map I was able to get through in about 15-20 minutes and from there it was simply game over. This is perhaps the biggest disappointment of the game. While the game isn’t some hugely expensive blockbuster title, at $A7.50 it’s also not the cheapest game on the market. For that sort of price, I would hope for more than 15 minutes of fun. I would hope that an update brings additional content, including some larger levels. There has been no indication from the developers that I’ve seen that suggests whether or not this will occur. For a game that takes up over 10 gigabytes of disk space, it really does seem odd that you get such a short amount of gameplay out of it. 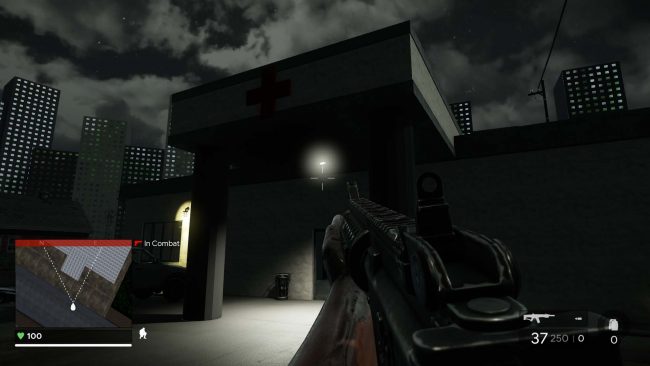 The graphics in this game are somewhat middle of the road. They’re not highly detailed by any means. They are relatively simplified to deal with the lower system requirements of the game, which is reasonable. However, they’re still moderately passable.

One thing I will say is that the lighting is sometimes a little too dark. Given the nature of the game, this is understandable as the storyline is set at light. However, it does at times make it difficult to work out where you are being attacked from if an enemy is firing at you from a distance.

For a game that was over 10 gigabytes in size, I was expecting somewhat more than what I was able to achieve. A $7.50 purchase for a 10-gigabyte game with only 15-20 minutes’ worth of gameplay doesn’t sit well with me.

This is really disappointing because, either through a larger map or more levels, this could be an interesting game. But as it stands, it is a bit of a disappointment.