This particular game came after I was searching for other horror themed games after my Planet B24 review. I was looking for other games that had a similar feel to it.

This game gave off a particular horror-style vibe while also having a story-telling element. This is what interested me in adding it to my library. So lets dive in and see how it turned out.

When you launch the game, you find yourself playing a character called Marcus. You have been involved in a horrible accident and find yourself stuck in a train tunnel. You need to use the things you find in the tunnel to try and work out how to get out of the tunnel and back to safety. There are also certain obstacles designed to scare you, kill you, or both.

The premise of the game seems fairly straight-forward. The game is not quite as simple as it first sounds though, as the game has one massive twist to try and keep things interesting.

Unlike other games, you will not be able to play through the game without dying. Dying is a very normal part of this game and is completely unavoidable. This is where you have to be observant. Every time you die, you will note that there are very slight changes to the map. Either a new object or clue will appear, or a new part of the map will open, or you will have a new puzzle to solve.

This may come as a bit of a spoiler, however I think it’s important to add this to give the game’s name a bit of context.  One of the early objects to appear after your first death is an elixir that you can use to outrun one of the wolves. These wolves add to the horror of the game, they’re out to kill you so you need to learn how to deal with them. Without giving too much away, they’re actually very creepy. 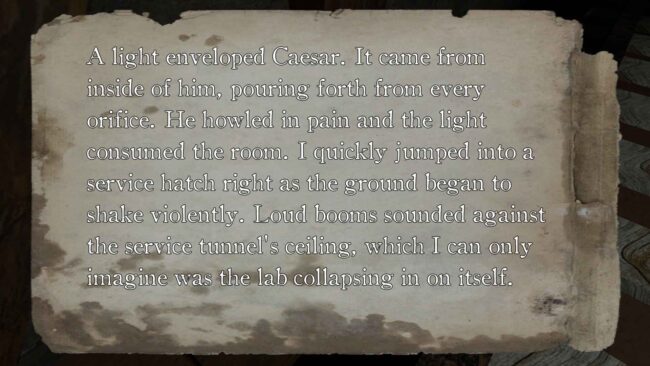 One other thing you will really want to pay attention to is the number of notes that get left around various parts of the map. These contain a number of clues you can use to work out what puzzles need to be solved and will help guide you through certain parts of the game.

The game is really quite engaging. It’s not one of those games you’d want to do while tired or are for whatever reason not completely alert as you will need to be able to wrap your head around the puzzle-solving aspects of the game. You will need to take quite an active role in solving the puzzles to get anything out of this game so it will involve a lot of thinking to try and get through. I did enjoy that element of the game though, it’s not your usual hack-and-slash first person shooter. It did sometimes take me a moment to work out a certain part of the game, but I do believe that’s the point.

This game does seem like one that would also be suitable for streamers, as you can also engage your audience in helping to solve many of the puzzles you come across. They can also take great delight in your reactions to the creepier sections of the game. I could see this as a very good way of building viewer participation if you’re into horror-themed games. 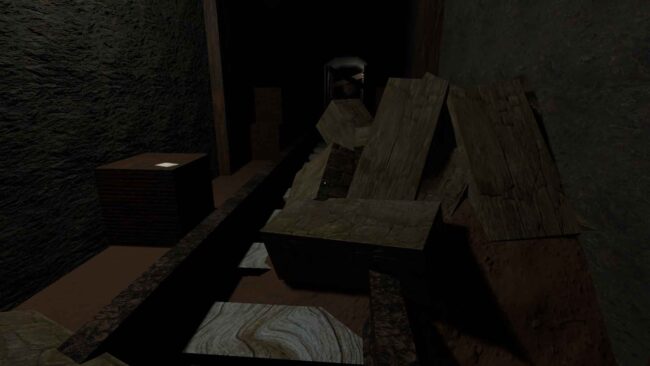 The graphics of this game are actually really well done. The atmosphere that the graphics create is a really good balance between great scenery and being really creepy. The only criticism is that the texture used for the tunnel wall is a little repetitive, but that’s the only thing I’ve noticed so far.

The voice acting in this game is really good. The voice acting done for the wolves was really creepy and well done. It was very successful in creeping me out which I believe is the point. The atmospheric sound was really simple, but you sometimes don’t realise how good it is at prompting a reaction out of you. The acting of the lead character is also extremely natural and does not come across as forced. I believe the main developer also did the voice acting, so we have a multi-talented developer on our hands.

This game is very well done. I haven’t quite completed the full game yet, but this is one I want to keep working at. I found the game to be very engaging, and enjoyed the creepy aspect of it.

If you are a streamer who enjoys horror games, I could see this being as a way to engage your audience. The puzzle solving elements of the game would be a great way to bring your audience in to help you out, with the creepy elements good for allowing your audience to enjoy your reaction. I can see this as a good way to drive viewer participation and engagement.

This game has a slightly different play style. It’s unusual in that constantly dying is an essential part of the game. It’s nice to see that some game developers are really trying to keep these genres interesting.