I’ve referenced my appreciation of vintage computers a number of times. I only refer to it again because this is one of the reasons behind me looking at TimeShifters. This game bills itself as an old-school first-person shooter inspired by games like TimeSplitters and GoldenEye.

I thought I’d give it a run for its money, see if it holds up and how well it captures that retro aesthetic.

TimeShifters is a fairly simple first-person shooter. You essentially choose which map you want to complete, choose which character you want to play, and then start shooting. There’s nothing particularly complicated about it. This is something I can appreciate, as you can get to playing the game quickly without getting too caught up with game mechanics.

The developers claim that it is heavily influenced by TimeSplitters and GoldenEye. As someone who has never actually played either game, I’m not really in a position to confirm how much it has been influenced by these games. If I were to make a comparison, I’d compare it more to a simpler version of Wolfenstein 3D. By this I mean it is the same level system and a similar combat system. However, unlike Wolfeinstein 3D, there is no way to increase your health.

This makes the game extremely easy to play. When I started playing it, I actually did not miss the health system at all. It meant I spent a little more time dying, but this just added to the challenge of the game. The absence of a health system forces you to start learning the map and becoming a better player.

The only major thing that I found was with weapon selection. As you go along, you will pick up different items and guns to use as weapons. As I have become accustomed to more modern games, I have adapted to using the scroll wheel to select different weapons. This is something that I was not able to do within TimeShifters. Even though it wouldn’t strictly fit into the retro goal of the game, I think this is still a glaring omission given this is something that people are used to by now.

The game is in some ways surprisingly fun. The simplicity of the game means you don’t get caught up in complex rules or storylines. It is really just point, shoot and have fun. The hardest part of it is learning the map and learning where you might become unstuck. The only real issues that I had were the inability to switch weapons using the scroll wheel, and the graphics issues which I’ll outline below.

Unlike the early version of Wolfenstein, you also have the option of doing online play, however at this point I have been unable to test this particular feature. 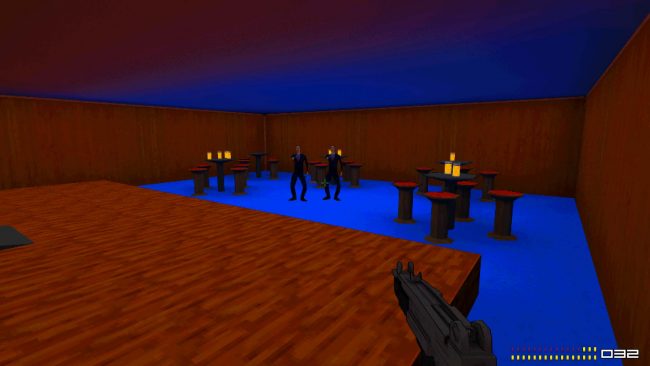 The graphics are a little bit of a mixed bag. They’re obviously trying to give the game an old retro theme. For those that know their retro games, I would put the graphics somewhere between Wolfenstein 3D and the original Doom.

The issue I have is that the characters themselves come across as a bit stiff. The animations they’ve used are a little unnatural looking, even given what would have been possible given the capabilities of the era they were trying to emulate. This does take away a little from the experience.

The textures themselves also look a little off. I know they are trying to simplify things, however the textures they’ve used in some places still look odd. I think a few better textures would certainly improve the graphics and make the visual aspect at least passable. At present. It just looks bad, even by the standards of the period it is trying to emulate.

Part of me really likes the game. It does really look like they’ve tried to emulate what I liked about the early Wolfenstein games. The basic mechanics of this are fine and the gameplay itself is really very fun.

The game is just let down by some really dubious graphics choices that, even given the retro look the developers are trying to emulate, just look odd and unnatural.