I believe I’ve made many a reference to my love of vintage computers on GeekJabber. If you didn’t pick it up from the retro week a few months back, I have brought it up in some of my other reviews.

This interest in classic computers is what interested me in Vonbit. Not only does the game have a bargain price tag, it also seems to be a remake of the classic Space Invaders arcade game. I thought it worthy of having a bit of a play through to see how faithfully it could recreate the original game..

Launching the game for the first time and things are fairly straight forward. There aren’t any particular options to set, and the defaults seem fairly sensible so unless there’s something you desperately want to change, you can get away with the default settings.

Going into the game the game play is almost identical to the early Space Invaders games that were prevalent in gaming arcades and on home computer consoles in the 1980s. It’s hardly surprising given this is what is being recreated here. It’s not exactly the same game in that you do start out with a smaller number of aliens attacking you and it slowly builds in difficulty, but it’s otherwise exactly the same concept.

I did find a few things that almost caught me out. The first was that I was expecting there to be keyboard controls. After a few moments of confusion, I noticed that the game was controlled entirely by my mouse. For those that prefer keyboard, that might be a disappointment. It may work with a controller, however because I don’t have one handy, I’ve got no way of testing this.

The other one is the game is extremely fast. This makes the game extremely challenging and you have to have particularly fast reflexes to be able to play this version of the game. Of course, you don’t want to make the game too easy, however this seems far faster than I remember any version of Space Invaders growing up.

Aside from this, it was a decent remake of the earlier game. I did make a reference to my love of retro computers earlier, and there’s a reason for this. There are those retro gamers that prefer to use the original hardware of the time. There are others that are a bit more relaxed and would be happy to either emulate the original machines via other means or remakes of games of the era. This game could definitely give the latter group their nostalgia fix. It’s simple and it works. 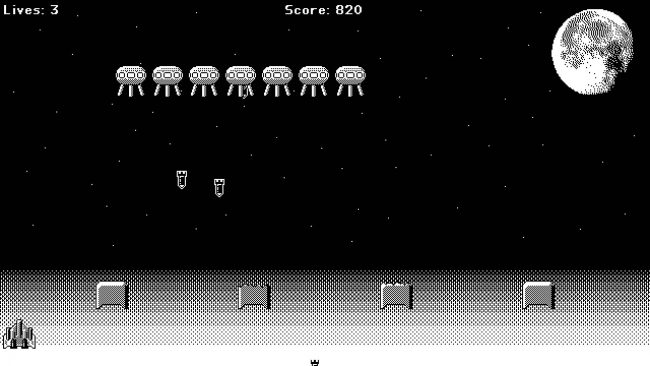 There is only one area that I think needs improvement here. It’s very obvious this is a game designed to tap into people’s nostalgia. Even going back to the early 1980’s, most home computer consoles supported colour, even if it was only very primitive colour. Arcade machines of the era almost definitely supported decent colour at this time.

It was slightly disappointing that Vorbit is only in monochrome. This is disappointing, because the graphics are otherwise a perfect recreation of what would have been around at the time these games would have been popular. I think getting a bit of colour is really needed to get the full arcade or home console experience.

As a recreation of a classic video game, Vonbit does a great job. It mostly is a faithful remake of an arcade classic.

The only disappointments are the lack of colour graphics and the lack of keyboard controls.