Gamers these days are absolutely spoiled when it comes to gaming. With the advances in processors and graphics cards, developers have been able to provide visually stunning games with a lot of technology crammed into their gaming engines. Some younger members of our audience may not know of a time when things were a little more primitive.

The game I will be looking at today is one of those earlier games. Released in 1992, it was a major milestone for gaming on the IBM PC. This was before 3D acceleration ruled the world. Even 2D acceleration was not guaranteed. This is an early example of how the relatively modest capabilities of the 386 processors with VGA graphics common at the time. It was not the absolute first, there were others such as Catacomb Abyss that came before it. Wolfenstein 3D is notable for being the game that people are more likely to remember, and also uses a far more developed version of the same engine. It was through this game, as well as the earlier Catacomb Abyss, that the technology was developed to allow games such as Doom and Quake to exist and really cement the IBM PC as a serious platform for 3D gaming.

This, alongside Lemmings, were the first two games I learned back in the day. It still hangs around today, being packaged using DOSBOX to allow it to run on modern hardware. I think it’s time to look at this relic of the past.

The game is relatively simple. It is a first-person shooter. You play the character William “B.J.” Blazkowicz, and the idea is you will need to break your way out of a Nazi bunker. You will need to navigate yourself around each level, kill the guards, find secret doors and treasure, and also find the key and the exit to the next level. The last level you have to engage in a Boss Fight and once you get past this, you’re free.

There are six individual episodes to complete. Back in the day, the first episode was provided as “shareware”. You were encouraged to share this version of the game amongst your friends. When you bought the full version of the game, you were provided with the remaining five levels. As a side note, I mentioned that My Friend Pedro uses a similar model, showing that some developers seem to be abandoning ad integration and microtransactions.

One thing that should be mentioned is that there is a certain amount of low-resolution Nazi imagery used in the game. This is in the form of swastika flags and images of Adolph Hitler’s face. It’s not done in a way that suggests a return to Nazism is a good thing, but in more modern times this sort of imagery can sometimes be a point of contention. If this imagery upsets you, this might not be the game for you. It was banned in Germany when it was initially released due their use of this imagery.

For a game that only takes up a few megabytes of disk space, there has been quite a lot of content packed in. The game itself takes up less than 7 megabytes (yes, megabytes!) of disk space, yet there are 6 different episodes packed in there. In an era where the typical hard drive was 80 megabytes or less in size, this represents a fairly decent chunk of disk space. Given that most games now can easily run into several gigabytes, it’s hard to get your head around how much could be packed into such a small amount of disk space.

The game itself is still very playable even today. I’ve previously managed to go through the entire first episode on my old 4th generation Intel I5. Playing it on my more modern I5-8500 is a breeze. Given the game was intended to run on a Potato PC, this is hardly surprising. The controls are a simplified version of what a modern first-person shooter would use, though the only controls you get are to walk in a particular direction, open and close doors, and shoot. There is no jump or crouch as the game engine used does not support these features.

The only hitch I’ve found is that if you switch to another application, you sometimes have to press ALT+ENTER when you return to Wallenstein 3D to return it to full screen. Given this game was never intended to run on Windows, this is a minor hitch. 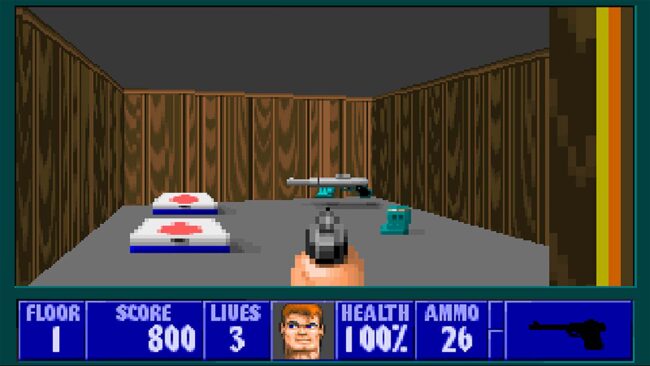 Trying to put the graphics into modern terms doesn’t quite feel right. This game was released in the early 90s and was designed for the very primitive graphics hardware of the day.

Of course, the graphics will be low-resolution and a bit pixelated by modern standards. But this is still very impressive given that the computers of the day would barely pass as a pocket calculator now. This is why the game was so revolutionary. This is one of the first times such primitive hardware was able to do anything that even remotely resembled 3D in a game title.

For its day, this is a really very impressive use of the technology available at the time. This is a demonstration of how, if you’re prepared to be a bit creative, you can push a machine to its limits to achieve something incredible.

The fact that this game is still around nearly 30 years after it was first released really is a testament to how much of a breakthrough this game was.

Those that weren’t around when this game was first released might not understand how important this game was. For those that were, and who want to go for a trip down memory lane, this game is still playable 30 years on. It’s still the original game, and through the power of DOSBOX, works very well on modern hardware

Given the history of this game, I’m glad it has been preserved for future generations and has been made to function on modern hardware. This is one of those classic games that should not be lost to time. Now if only they’d do the same to Lemmings.