Very occasionally, you will come across a game that is a bit of a head scratcher. A game that makes you question why it exists because it just seems like a really terrible concept. It’s fortunately not very common.

Crazy Santa appears to be one of those games. It just seems to be a game that on the face of it, it seems to be just terrible, despite positive reviews on Steam. But given it only costs $1.50, I think it’s worth having a look at least once to see exactly how bad a game can be.

The gameplay is extremely simple. You play Santa. You have what appears to be an axe of some sort. Your goal is to destroy the building in front of you, slowly, to try and deliver a present

That’s it. No, seriously. That’s it. The game is extremely basic.

I will be completely honest. I played this game for around two minutes and was already bored of it. I didn’t have high hopes for this game, because to be fair the game does exactly what it says on the tin. But that said, I was expecting at least …. something more. This game just didn’t seem to offer up anything else and I just sat there needlessly clicking away while more and more holes appeared in the wall.

The game offers minutes of destructive entertainment, but outside of this, I’m really not quite sure what the point of the game is. It’s really unclear what you’re meant to get out of this game, except maybe a little bit of destructive stress release. I suppose if this is what you’re after, this game does what it says in the tin, but I fail to see how it could do anything else. 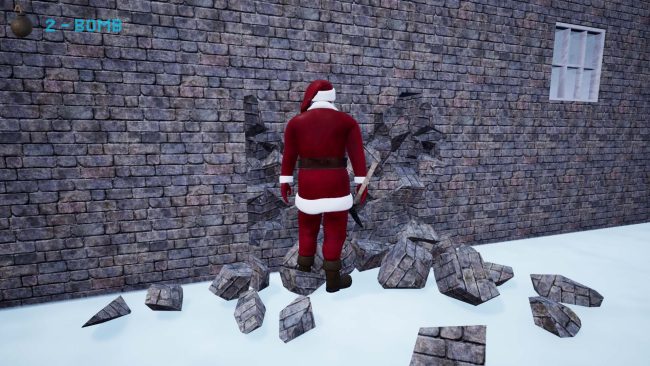 The graphics are another interesting mixed bag. The title screen looks like it was done in MS Paint in about two minutes. Not a great start.

Once you load a level, the graphics are …. OK I suppose for a game that costs $1.50. However, the physics are not as dramatic as the game would suggest. Where’s the kaboom? There was supposed to be an earth-shattering kaboom. If you’re going to make a game that seems only to vent, you could at least give us that.

But the quality of the graphics, it’s fair to say, are on par with the rest of the game.

If you’re looking for a game that will give you minutes of fun letting off a bit of steam, I suppose this could work. I really don’t see how this game would serve any other purpose.