Tetris is an interesting game for me. I remember playing one of the early versions back in the early Windows Entertainment Pack days, back when Windows 3.0 was common. I was never particularly good at it, but it was a fun little diversion.

Tetris Christmas seems to be a version that fits in nicely with our Christmas Week theme. It’s also fairly low-cost, and I have been looking for a more modern version for my game collection.

There’s not really a lot to say here. Tetris is Tetris. The basic point of the game is to use the differently shaped falling blocks to form complete lines, which then disappear. In this respect, it follows the original Tetris game.

One slight deviation from the original game is that you sometimes have grey lines already formed when you start a game. You can consider these to be already half-completed lines, and you need to complete them. This caught me a little off guard at starts, but is actually an interesting change in the game style.

There is a reason this is called Tetris Christmas however. The background graphics and sound track follow a Christmas theme. This does technically mean that it falls into our Christmas theme. However, you could in theory silence the audio and treat it as a normal version of Tetris. In this sense it could become a permanent addition to your collection that you could play outside of the silly season.

In pretty much every other respect, it is just a normal version of Tetris. Some may find that disappointing, but the game has otherwise been implemented extremely well, and the came is extremely low cost. For those that are wanting to add Tetris to their collection, it could a good addition at any time of year. 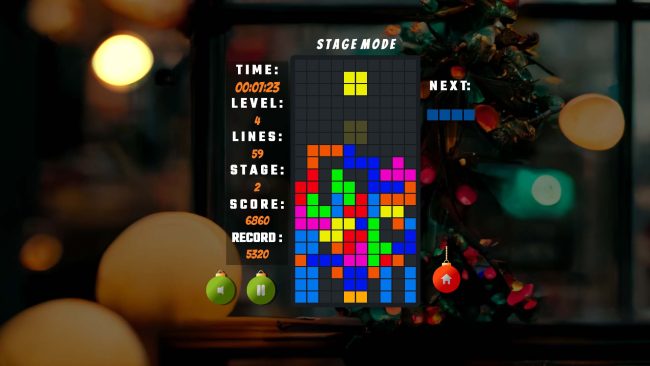 The graphics in this version of Tetris are actually excellent. They’re very simple, but then this is in line with every version of Tetris I’ve seen. Anyone who knows the early versions of Tetris can see this follows that same visual style.

If you’re looking at a completely reimagining of the Tetris look and feel, this version might disappoint. Burt for those that are looking for a low-cost version of Tetris that fits in with the original graphics style, this version is spot-on.

I’m rating this game fairly highly, simply because it is a very well implemented version of Tetris. It technically does qualify for Christmas Week, though this is understated enough that you could pretend that it’s a standard version of Tetris and have a low-cost version of the game to play at any time of the year.

If you’re looking for a version of Tetris that won’t break the bank, we might have a winner on our hands.