I think it’s time to add another child-friendly game into the mix. By its very name, you can tell this is a slightly older game. We’ve done that a few times here on GeekJabber, so what’s one more going to do? After all, it came out in January 2019 – so technically nearly a month after Christmas! – and so may not have come up on many peoples’ radar.

This game is again a very simple game that I think is worth visiting as it could be another one to add to the list of games suitable for younger audiences.

The game is relatively straightforward. When you first launch the game, you realise that Santa is running late for his Christmas toy run. You’ll have a very short period of time to fill Santa’s sack with toys. Once the time runs out, you must then go and deliver as many as you can against the clock.

The basic principle is fairly easy, although there are a few things that sometimes get hidden away. When you do the toy run, you don’t necessarily need to deliver to every house. When you aim your present delivery gun at each chimney, it will turn white if you need to deliver a present and stay black if you don’t.

The other thing to each out for is each house only needs a certain number of presents. There will be an indicator at the top left of the screen that will tell you how many you will need to deliver. If you deliver too many, they will spill onto the ground and you may run out of presents before the time is up.

Lastly, there will be cars. You will need to avoid the cars making their way down the street to avoid a crash.

This is a little more complex of a game, but it has its good points. For those young children who are still developing numeracy skills, this would be a good way to help. You will also need to aim carefully, so it can be a good way of developing basic computer mouse and keyboard skills alongside spacial awareness. This can be a good way to sneak in a little bit of educational stuff into a fun Christmas game. It seems to be done very well, it just needs the player to be able to focus on more than one thing at once under pressure.

The premise otherwise is really quite simple, yet once you get into the game it’s really quite a bit of fun. I was having a lot of fun trying to set challenges for myself and try and beat my previous score. You wouldn’t think you could get so much mileage out of something so simple, particularly at this price bracket, but in this case I was pleasantly surprised at how well it worked. 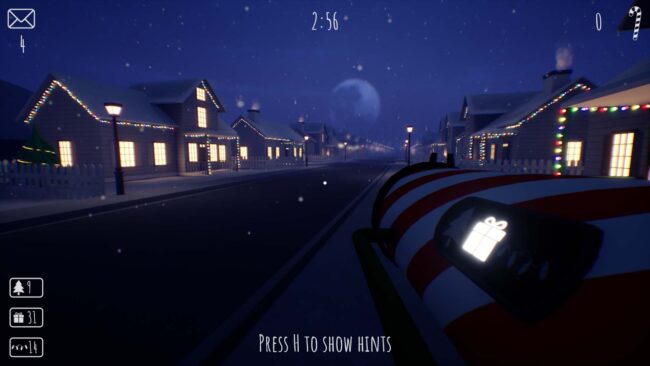 For such a cheap game, particularly one that targets such low system requirements, I was not expecting a whole lot. Yet I was pleasantly surprised at how good the graphics actually looked.

There is still a certain simplicity about the graphics, yet this is another example of how simple can still look good. And for this type of game, it doesn’t need to be bogged down with super-high details.

It’s got a really good balance here and I think should be an example of how to do graphics well for lower-powered hardware.

As a trivial little game suitable for children in the holiday season, this game really does hit a lot of targets. Given its price and low minimum requirements, I was honestly not expecting much. I was blown away by how much they were able to pack into such a small package.

Given that this was originally released in January 2019, a month after Christmas, this is a game that might have flown under the radar given it’s really a Christmas-themed game. I would love to see this game get a bit of attention during this coming holiday season as it is punching at least a little bit above its weight,