I wanted to round out Xmas Week this year with another free game. This is to try and provide a few more options for those that might not have huge budgets for games but want to have a few things to play during the silly season.

Ho Ho Home Invasion also ticks the box of being fairly kid-friendly so makes it suitable for providing another option for the younger members of the family. I thought I’d give it a run for its money to see if it’s worth adding to your collection.

Ho Ho Home Invasion is another game that falls into the fairly simple category. You are playing Santa, and the idea is you need to enter the house and deliver the gifts without getting spotted.

There are a variety of ways that you might get caught out, including by those sleeping in the house and various security droids. If you are spotted, then you do not make it through the level. To make matters more challenging, the presents don’t always need to be delivered to the same location in the house and can be spread out over multiple locations.

A lot of the games I’ve covered over this week have been somewhat simplified to make things easier for younger audiences. There is a little bit of that here too, it is a fairly simple, straight-forward game. Having said that, it involves a lot more strategy than the games I’ve covered already. This makes it more suitable for slightly older kids with better ability to solve problems and develop strategy. It may frustrate younger kids for this reason.

This would make it a good game for those that are in late primary school, whereas the games I’ve covered earlier in the week might be better suited for those in earlier primary school years. I do like the fact that there are options for kids of different ages, particularly free options that don’t always require kids to reach for mum and dad’s credit card.

I do also like the problem-solving parts of this game. They are really very well done. It’s not a game that you just passively play, it’s a game that you have to play an active part in playing. It is very good at developing problem solving skills, so could be another way to sneak something educational into the silly season. It’s really quite well done.

The game itself is also really fun. For a free game, it’s really very engaging and managed to capture my attention for a decent period of time. IT’s very well done, and is a prime example of how to make a free indie game and do it well. The developers have done well to create a really fun came that is also challenging. 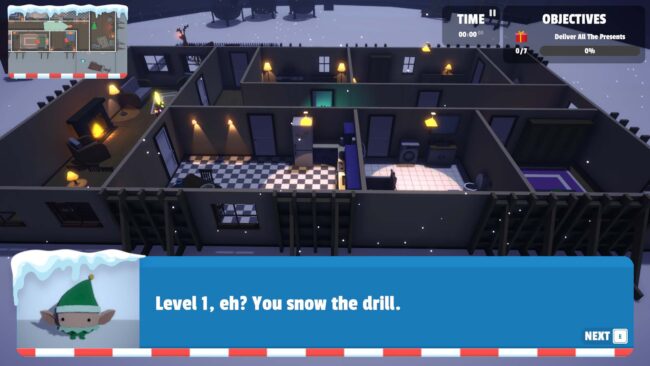 As a free game, this is another one that I am actually quite impressive. A lot of attention to detail has been given to make things work.

The quality of the free games I have reviewed this week really make me quite confused about some of the indie games. I’ve had a few low-cost indie games where the graphics were fairly average, and I’ve commented on that. There was part of me thinking this might just be par for the course for low-cost indie games.

This game is making me rethink this. If this game, being free, looks this good and still targets what is essentially a very basic graphics setup, there really shouldn’t be any reason for some of the other indie games to be that bad. I’d really love some of the indie developers to play something like this just so they can get an idea of what can be done on a budget.

This game is the perfect to add to the collection of anyone with slightly older primary-school aged kids. For a free game, it’s really quite well done.

I’d love to see more indie game developers release stuff that is at this level. It would be nice to see a bit more consistency in the quality of some of the games I’m testing. While there are some great examples, such as this, there are also a few that could use some improvement.