While most of the games I’ve reviewed this week have been reasonably low cost, I’m aware that some people don’t have huge budgets to pay for games. Particularly at this time of year, where people’s budgets need to extend to other things, there may be those looking for a few free-to-play options to help their budgets go a little bit further.

No Crooks On Christmas is a recently released free game that looked interesting. It seems to be a variation on the tower defence genre of games. Will a free option be worth playing?

The basic premise of the game is reasonably simple. Your home is being invaded by Goblins, and they’re coming to blow up your Christmas tree and steal your presents. You have a series of points that you can use to place towers to try and stop them.

These towers can have a variety of different abilities, including the bomb, the water bucket and … the toilet. Higher levels unlock more of the abilities. To add to the challenge, your towers have only a limited lifespan. You will need to keep track of when they disappear so you can replace them if needed. This makes the game a lot faster paced than you’d first expect as you have to focus your attention on a lot of things at once.

If you take out all the goblins before they blow up your tree and steal your presents, you complete the level.

As far as a free game goes, I was not expecting much. The quality of the lower cost indie games I’ve found to be a little variable, and so I set my expectations accordingly. This game is actually quite impressive given its free price tag. The interface itself comes across as really very polished. Obviously, a lot of thought has been put into it to make it work well.

The game was actually a whole lot of fun to play. Once I got into it, I found it really quite difficult to stop. I am really quite impressed at how well the game has been put together. It’s a simple concept done really well. 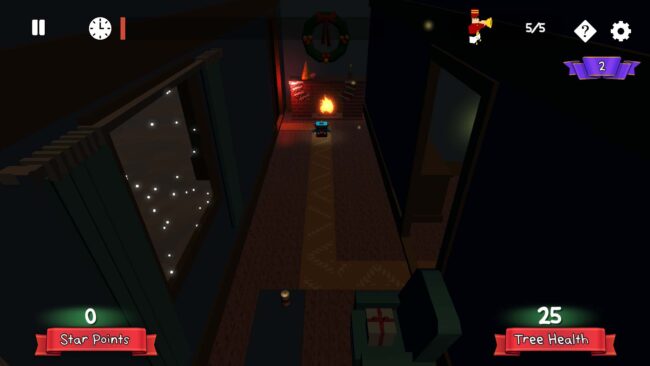 The graphics here are equally impressive. It should be noted that the minimum requirements for this game are really quite low. Almost any midrange machine released in the last decade or so could run the game based on the requirements. This means the graphics have been simplified quite a bit by modern standards.

Having said that, they still look fantastic. I’m very impressed by the quality of the graphics given the low system requirements they have been aiming for. It’s got an art style and aesthetic that works very well. If you’re looking at how to do graphics well and target lower system requirements, this is a lesson in how you can do that.

Far too often graphics quality is what suffers the most with these lower cost games, particularly those that target lower end hardware. This game proves that just because you’re running an older PC iot doesn’t mean that all of your experiences will be terrible.6

Given this is a free game, I am really quite impressed by how well it has been done. It’s a bit of holiday silliness. It has a really refined user interface, and excellent graphics given the low system requirements.

If you’re looking for a free game to have a bit of fun with over the holidays, this is actually really well done. This is one of the better free games I’ve seen and is an example of how to do things right.