I’m sure I’m not the only person who is familiar with calling Christmas the Silly Season. It’s a fairly common turn of phrase. Whether it’s because the kinds are running amuck during the school holidays after eating one too many candy canes or you’ve had one too many beers at the office Christmas party, I’m sure we’ve all done something a little silly at least once.

It seems fitting that at least one game I review for Xmas week has a little bit of silliness of it. Present Danger seems to fit the bill. So lets get this started.

The game is relatively simple. When you launch the game, you are placed inside a moderately small boxing ring like play area. You will be attacked by killer Christmas presents and the idea is to shoot them before they bite you. The goal is to survive as long as you can before being eaten by the killer presents.

There’s really nothing more to this game at all. It’s about as simple as it gets. There’s no complex storyline to follow or any rules to try and get your head around. It’s just simple first-person-shooter where you try and kill the Christmas presents while remembering to reload.

One thing I did notice early on is the game is a lot quicker than I expected. It’s a really fast-paced game that requires you to be on your guard. It’s not a chill game you’d play when you just want to relax. That does add to the challenge of the game though. It’s fast-paced and challenging..

The game itself is actually quite a lot of fun when you get into it. It’s one of the games that sounds like you’d get bored of it fairly quickly, but once you get into it, the game becomes really competitive. There were a lot of times where I was wanting to try and beat my own personal best.

Once the pace picks up, the game becomes extremely competitive and I found I was constantly trying to improve my score over what happened in the last round.

Once you get into it, it actually becomes difficult to stop playing. It’s quite a lot more fun than you’d expect. It’s just fun, silly and is a game that befits being part of the silly season. 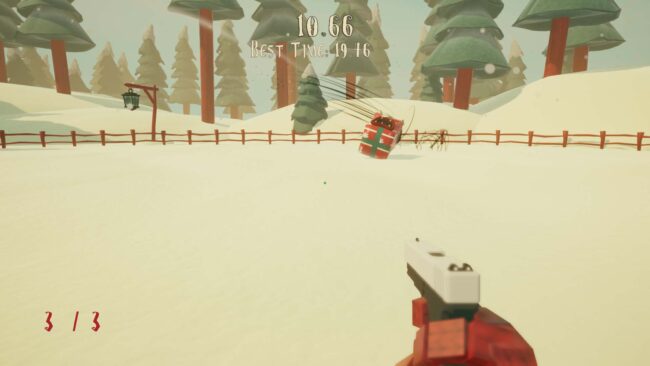 I like what they’ve done with it. It’s a very nice art style that fits the game extremely nicely. It’s yet another example of how to do this art style well.

Where other games suffer by being over-simplified, in this game they’ve got a good balance. The game doesn’t need to be highly detailed, and here you’re not being distracted by excessive bling. The games simplicity allows you to focus on the gameplay.

As a cheap and cheerful game that adds some silly so the silly season, this game works really quite well. The combination of FPS and Christmas works unexpectedly well, and the graphics style is an example of how to do this well.

It’s a fun little game that worked far better than I anticipated. If you’re looking for a fun way to kill a bit of time this silly season and let out your frustrations onto a bit of FPS action, this could be the game for you. –