Those that have been on the site for a while know that I enjoy my fair share of retro-computing. The Wolfenstein franchise has made an appearance on the site a few times, particularly as a retrospective look at the original Wolfenstein 3D game.

While this particular game might be a year old now, it caught my eye because it had an aesthetic appeal similar to the early Wolfenstein 3D game. As a person that appreciates the retro style of some of these earlier games, I thought I’d give it a try to try and fulfil my desire for a game that’s both seasonally appropriate and retro.

The storylime seems to be borrowing quite heavily from the current COVID-19 epidemic. You play character Vladimir Vladimirovich. You are hoping for a good Christmas this year, only for those plans to be foiled by the second COVID-19 epidemic which is currently affecting Santa’s residence. Furthermore, a terrorist organisation has teamed up with the virus to deal a double-blow.

This was definitely an interesting and somewhat relevant game given the ongoing issues caused by the pandemic. There were a few issues that seemed to crop up.

There didn’t seem to be any of that. There appeared to be no clues as to what the objective of the first level actually was. I managed to find an exit to the next level, but when I tried to open it, it didn’t actually do anything. I managed to walk around a little bit more and find another exit, which did appear to work and take me to the next level.

Here I was greeted with what I can only describe as a pile of randomly-placed decaying bars with even less of an idea of what it is I was supposed to be doing.

Going into the help section from the main menu and the only information this seems to give you is the keyboard controls. Not a lot of help there. Going back to the store page, and that didn’t give me many more clues at all.

At this point I gave up on the game. I might not be the world’s best pro-gamer, hell this site is basically built around the fact that I’m more of a casual gamer with a decent amount of tech knowledge. I don’t think I’m that naïve when it game to working out what appeared to be just a variation on a primitive f6irst-person shooter. Yet I have been unable to work out what the point of this game actually is or what exactly you’re supposed to do

Even taking account the low price of entry, this game is still not making any sense. I don’t expect every game in this price bracket to be an absolute masterpiece, but I’d like to think it had some sort of obvious point. If there is one, the developers have made a good effort at trying to disguise it. 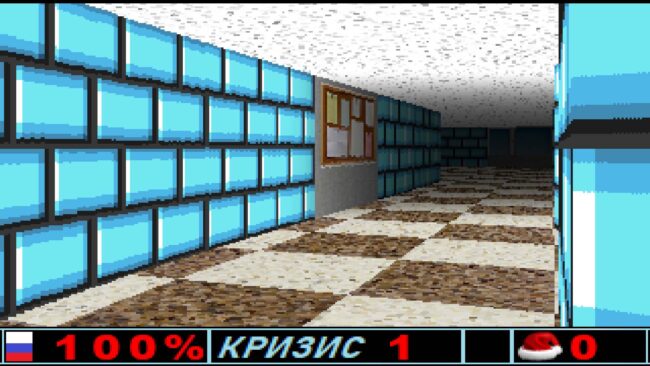 The graphics I’ve noted seem very heavily influenced by the early Wolfenstein 3D games. It does seem to do an alright job of trying to emulate this basic look and feel.

There’s not really much point in elaborating on this further. They’ve been able to get the basic look and feel of the Wolfenstein games to an OK level, but without being able to find a point to the levels I was able to play, it is really difficult to establish how well the graphics try and fit any storyline they are trying to portray. This is somewhat of a disappointment, because it had the potential to revive interest in some parts of retro gaming.

It is very rare that I refund a game in my Steam library. Even games that I’ve reviewed that haven’t been that great I’ve still kept, as I’d like to think most game developers are at least making an effort.

This is one of those games where I’ve made an exception. It just seems like a game that has no particular point, no clear way through some of the levels, and no way of getting information on what you’re supposed to do to get through the game. It just doesn’t seem right to be investing money, even a small amount, into a game that just doesn’t seem to have any point or any way to navigate through.

That’s the one thing I hope the developer tries to work on: just making it a little easier to try and decipher how to get through the storyline. I’d like to think I’m at least smart enough to be able to work out at least the basics. In this case, it falls widely short of that mark.