With this in mind, I wanted to include at least one game that would be appropriate for the younger members of the family to enjoy. The simplicity of this game and the game’s storyline seemed to fit the bill perfectly so I thought I’d give it a spin to see how well it would fare.

The gameplay here is about as simple as it gets. The basic principle is you are controlling Santa’s sleigh, and your job is to deliver the presents to all the different houses without crashing the sleigh. You deliver presents by hitting the yellow beacon sitting above the house. You will need to guide the sleigh to avoid crashing into the ground. Once you have finished delivering to all the houses, that level will end and you will go onto the next map.

This might seem a rather simplified version of what happens, but that really is all there is to this game. It’s really a very simple concept, which makes it really easy to explain to younger kids who may not yet be able to comprehend complicated game rules.

The controls are reasonably standard. You’ll use the normal arrow keys to turn the sleigh and the page up and page down buttons to control the height of your sleigh. They’re not particularly complicated, though I am an adult with larger hands. I’m not sure how well smaller hands would cope with this arrangement, and I would have liked to have seen controller support as an alternative to keyboard.

I can definitely see the appeal of this game. It’s not something I’d play for hours on end as an adult. As a fairly easy game that is fairly easy for a younger child to get their head around and distract them for a while, I think we may have a hit on our hands. It would be a good way to introduce a younger child to gaming in a seasonally appropriate way. 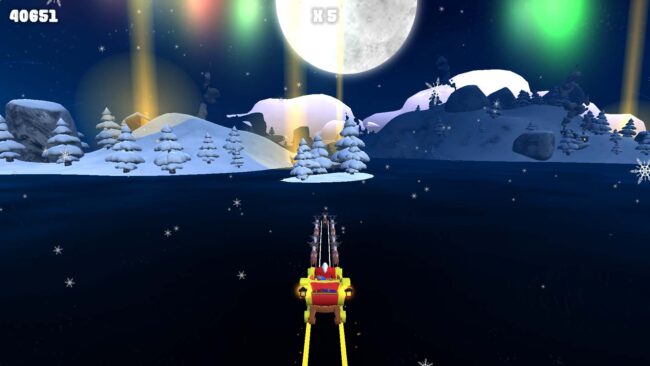 The graphics are fairly simple and cartoony. In this case, they are done particularly well.

The beacons make gameplay really very easy, and there’s very little to actually distract you. It’s something effective and simple that makes it easy to get your head around it. These things all work together to make a very simple game that’s easy for a younger audience to understand

This is an example of where they’ve got the balance of everything spot on. It’s been done really quite well. I’m honestly impressed at how well they’ve got that balance right.

This game is a perfect example of how to do a simple and fun game for younger kids. The game is simple, easy to to get your head around, and doesn’t have a complex set of rules to understand.

This makes it a perfect way to introduce younger children to gaming It’s not something that would be of much interest to older gamers, but as a kid-friendly game it seems perfect.