I have been somewhat of a fan of the Carmageddon series of games. I was introduced to the game by a friend in the late 90s and invested a bit of time into playing it. I also have a few versions in my Steam library, including the remastered version that entered the scene a few years ago.

While there have been a large number of driving and racing games, none that I’ve seen have captured that part of Carmageddon where you make a mess of whatever pedestrians happened to get in your way. This seems to have changed with Zombie Killer Drift, which seems to be a Carmageddon-like game for those that are more on a budget.

The gameplay is surprisingly simple. You start by choosing the car that you get to drive from the garage. You are then placed on a small map, and you are greeted by waves of zombies. Your goal is to wipe them out by running them over. Each new wave gives you more difficult zombies to try and kill, as well as more of them.

The more zombies you kill, the more money you can earn to invest into better cars.

This does seem to take a lot away from the game. Because of the small play area and the absence of the power-ups, it’s very easy to get bored of the game very quickly. After about 10 to 15 minutes of playtime, I found myself feeling like I was doing the same thing over and over. Zombie Killer Drift is not a game I can see myself investing hours into. I think readding the racing element at least over a larger play area would certainly add back some of what made Carmageddon great. 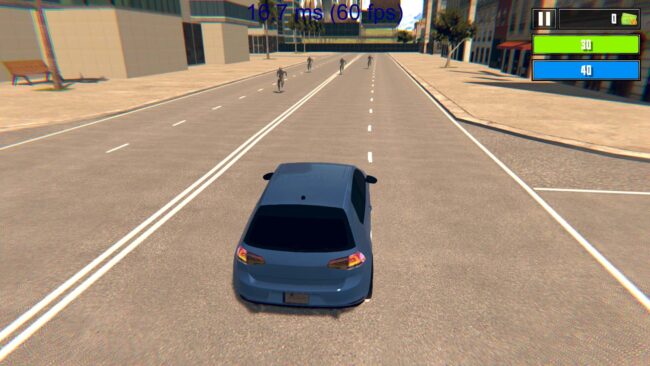 It seems this game is one of those that deliberately has low system requirements to provide a lower barrier to entry for those that can’t afford high-end gaming rigs. I have provided examples of when this been done well in the past, including racing games.

In this case, I was a little less impressed. The graphics are very flat and primitive with very little detail. This does of course help those running lower-end equipment, but this game I think takes it a little too far. Even games like Highway Traffic Racer are able to beat the graphical quality of Zombie Killer Drift qutie substantially and still maintain relatively low system requirements.

I normally encourage those that try to target lower-end computers. With the current round of chip shortages making ti difficult to get high-end equipment, having options for lower-end equipment means that casual gamers who are holding off on upgrades and using older equipment still have options to get hold of some interesting games. There are also those that simply cannot afford the asking price of gaming-level PC’s even before the pandemic. This has to be done well, and I think this is one area in Zombie Killer Drift that could have been done better.

I’ve spent a lot of time comparing Zombie Drift to Carmageddon. There’s a reason for this – it’s fairly obvious this game has been influenced by the Carmageddon series.

The problem is it does feel like a bit of a poor-man’s knock-off. I know this game is cheaper than Carmageddon, but I have played other games in this price bracket that are significantly better than this. The authors seem to have taken Carmageddon, tried to simplify it and just taken that a step or two too far.

If you’re looking for a cheap Carmageddon-like game for when you only want to invest a few minutes in at a time, this might fit the bill. Given the Carmageddon series are still available starting at only a few dollars more, this would be the better option if you want to relive the original game style this is based off.