Golf with your Friends is a game I’ve had in my Steam library for some time. It’s a game that I pull out every now and again when people just want to kill a bit of time. The game is a damn lot of fun.

It never occurred to me to see if there was a similar game for mobile until the game came up in my recommended list on my phone’s app store While thisgame might have been around for a while, I thought I’d give it a spin to see how well a game of this genre holds up on a smaller form factor.

Given it is also a free game, albeit with in-app purchases, I think this should quality for our free week theme this week. And it’s about time that I should add to my collection of mobile reviews.

The gameplay is fairly straightforward. Once you launch the game, you are taken through a tutorial. This will allow you to become familiar with the controls. These were quite intuitive so are very easy to get the hang of.

Once you have completed the tutorial, you will then be able to connect to a game. This will connect you with up to five other players. You will then play through three holes, and the person completing the game in the lowest number of strokes is declared the winner. If two players end up claiming the top spot, it then goes to a playoff where another shot is taken and the person who gets their ball closest to the hole wins.

As you level up, you are then able to get access to various power-ups to improve your game play. As the game progresses, you get access to additional courses to play on to add to the variety.

While you normally play against random competitors, you can also connect the game to your Facebook account and play against your friends.

I have played this on my Nokia 2.3, which is a lower-end device budget-friendly, and the game ran very smoothly. I will say though it is a game that will require a larger screen to be able to play well. The Nokia 2.3 is a 6.2” device. I’m not sure I’d want to play this on a sub-5 inch screen as this would quickly become clunky and unplayable. On the Nokia 2.3, it was extremely playable.

Once I got into the game, it was surprisingly addictive. Even competing against random people, it was actually quite a lot of fun once I got into it and it was easy to become super-competitive. As someone who gets lots of enjoyment out of Golf with your Friends, it’s nice to see a similar game work well on a handheld device.

My only concern would be that some of the features, such as playing with your friends, take a decent amount away from your points balance. While you can top your points up for money, if you’re not careful it could get expensive unless you use other methods to build your points such as playing against random people. On the plus side, there is not an obnoxious level of advertising. Swings and roundabouts I suppose. 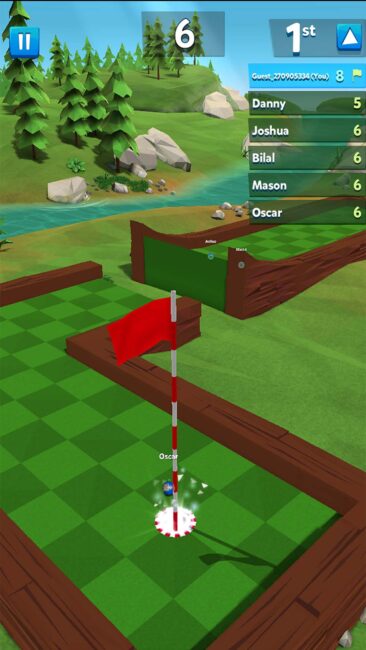 For a game that runs so smoothly on a low-end device, the graphics are really very impressive. I’d put them at least on par with Golf with your Friends.

The game does seem to prefer running in portrait mode. There is really no way to set it to landscape. This might annoy some users, as many people prefer playing in landscape mode and using both hands to control the game.

Aside from this, the game is really very well done. I’m truly impressed as to what they’ve able to pack into a game that runs so smoothly on a more budget-friendly device.

This game is really very well done. The interface is extremely intuitive, the games aren’t excessively long, and the graphics are really very impressive.

I do wish I’d stumbled across this game sooner. It’s an example of how to do things very well on a handheld device. For those that have played Golf with your Friends and are looking for an equivalent game to play on a mobile device, this is worth checking out.