I’m sure there are many people out there that are familiar with the classic card game Uno. It has become a staple of anyone who either has kids or has had to look after kids. With that in mind, I shouldn’t have to go into too much detail as to what Uno actually is.

This version I am reviewing brings the standard Uno game to the Android platform and turns it into a fun multiplayer experience for young and old alike. And with the initial investment being free, it has a very low barrier to entry.

When doing the initial launch, you will need to do an initial setup. This is something you normally only do once, and it’s a simple affair of giving yourself a name and selecting an avatar. I did have an initial hitch at first – for some reason the game would not let me use one of my normal player names “DogWomble” because it thought it was inappropriate. Using my alternative of MrDollinger and it seemed to work OK. Kudos for trying to keep it kid friendly, after all it’s a game that kids would be more likely to play, but the processes it uses for this seem to be a bit primitive. It seems to have most likely picked up on the “Womb” part of the username, suggesting it is simply doing a match to a list of words.

Launching into the game and you do have the option of going into a number of different game modes.

I spent a lot of time playing in Classic mode. This would be the mode most familiar to people. This allows you to play a classic game of Uno that we are all familiar with in a team of four, playing against a group of other players or bots to help make up the numbers. The big difference is it’s against the clock. This makes sense given that you’re playing with others who wouldn’t want to wait hours for you to make your turn.

There is also the option of a “2 vs 2” mode, where you are split into two teams and you can see your teammate’s cards but not your opponents. This adds a very interesting twist to the game, as your strategy needs to also involve your teammate’s cards. I’ve played a few rounds in this mode as well, and it is very well done.

It should be noted that there was no way that I could find within the game to communicate directly with your opponent outside of some existing pre-programmed quips. I suspect this is quite deliberate. As a game that would likely be played by young kids, it would be appropriate to minimise the risk of exposure to communications not appropriate for children..

There is a way of entering a Championship Series. This is something I didn’t really get a chance to test out all that thoroughly. This appears to be a series of events that runs over a series of weeks, and it would not be fair to do this mode justice given that I don’t necessarily have that much time to commit to every game that I review.

There is also the options to set up various “Fun rooms”. This gives you many options to set up rooms to play with your friends, either nearby or via the Internet. This, quite frankly, didn’t work. I went to the effort of asking another of our resident authors, MrQGames93, to install the game and added him to my friends list via Google Play Games. Both of us had the game launched. The game is supposed to allow you to select someone from your friends lsit to invite to the game. No matter what we did, I was not able to get him to appear in the list of friends to invite, so we have been unsuccessful in being able to start a network game After a solid 10 minutes of trying to get it to work, we both gave up out of frustration.

This is a shame because this appeared to have been supported, and if it had worked this would have been the easiest of the options to get multiplayer games going. 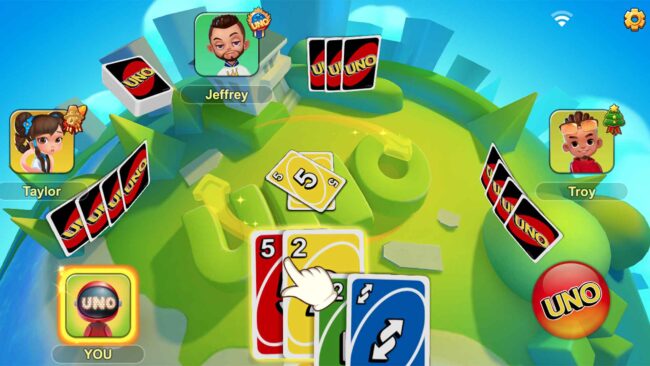 I liked the way the graphics were done. Unlike some games I’ve reviewed (I’m thinking my Fruit Ninja 2 review here), the menu interface was far easier to navigate and was significantly more intuitive. I didn’t have to spend ages having to figure it out, it tended to just make sense right off the bat.

Further, the graphics were visually quite appealing while being simple enough to cover a wide range of devices. The device used for testing was a Nokia 2.3, which while fairly recent, is at the lower end of the scale. The game did take a moment to load, which I expected being a lower end device, but once it had loaded it was actually very playable. I did not notice any sort of lag or stuttering that interfered with gameplay. This would suggest it has been very highly optimised to cope with a wide array of devices.

I’m very happy with the balance this game achieved in trying to have a very good visual experience while understanding not everyone can or wants to invest in the latest top-tier everything gaming phone.

The only downside I could find is that after you’d done a few rounds, it was a bit heavy on the “Buy more stuff” advertising for in-game items. I get that the game needs to make money, but I suspect this is a deliberate ploy to try and tap into the pester power of young children.

It is obvious that a lot of effort has gone into optimisation. This shows in its ability to run well even on a lower-end device.

The re are a few things I’m marking them down. One is the excessive encouragement to buy in-game items. I don’t suggest this needs to be done away with as they need to make money. But the frequency I was prompted perhaps needs to be reigned in a little.

Also, the fact that getting multiplayer to work via the Google Play Friends List was a disappointment. This does not bode well for multiplayer action when you’re trying to set this up with friends over the Internet.